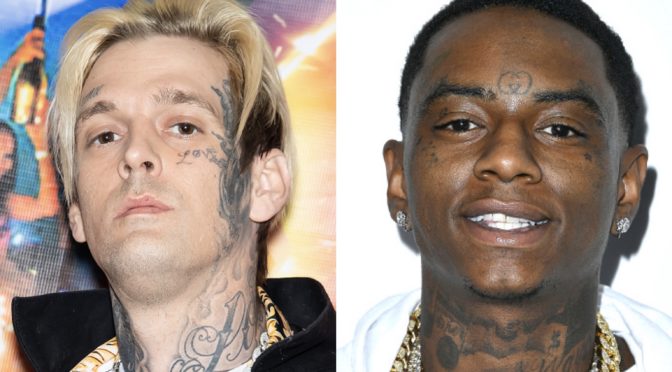 Well, at least he chose someone a little closer to his size this time because that Lamar Odom fight was truly methed, I mean, MESSED up.

Apparently, Aaron Carter is still all about the celebrity boxing life. Just a couple of months ago, Carter fought Lamar Odom in what turned out to be a pretty embarrassing boxing match. Odom won the match easily, and it should come as no surprise when you consider the height difference between these two. Despite the loss, Carter has been adamant about fighting again, and it appears as though he already has an opponent. Of course, former baseball player Lenny Dykstra.

Dykstra has been talking a lot of smack this past week, although, in a new interview with TMZ, Carter said thanks but no thanks to the 58-year-old. Carter would much rather fight someone who is closer to him in age, and Dykstra does not fit that bill whatsoever.

Instead, Carter is looking to go up against the likes of Soulja Boy, who has toyed with the idea of boxing in the past. Carter says he’s very confident he can defeat Soulja, who will probably tell you he’s the first rapper to ever throw a punch.

“Honestly, I would call out somebody, I would probably call out Soulja Boy, but I would rip him apart,” Carter said. “Here’s the thing — he just won’t respond. Because a lot of these guys in the industry, that do the same thing I do, they almost like to pretend I don’t exist. And, that’s because my record sells, and my numbers, and my concerts, and 26 years of longevity scares them, it threatens them.”

Let us know who you think would win between Soulja Boy and Carter. Would you watch this shit show?