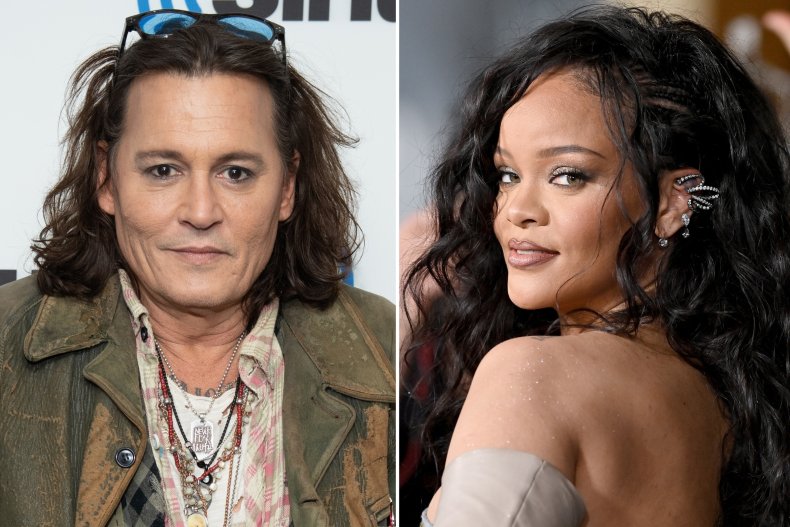 I don’t really know many people who are currently interested in seeing Depp in silk, lace, or a onesie, so abuse accusations aside, this is all around an interesting choice…but hey, I can only assume Rihanna has a vision if this is true.

In breaking news that currently has Stan culture once again debating and divided, Rihanna has reportedly tapped Johnny Depp to star in her upcoming Savage X Fenty Vol. 4 show. Yes, you read that correctly. Sources revealed to the folks over at TMZ (the same outlet that first reported he’d appear at this year’s Video Music Awards) that Rihanna and co. invited Depp to be featured in the highly acclaimed show, and that “both sides were super excited to make it happen.”

Depp, who will be the first man in the show’s history to have his own “star segment,” has reportedly already filmed his part. The show will appear on Amazon Prime Video on November 9. This news arrived just one day after exclusive photos of the production were published by Vogue. In addition to Depp, viewers can expect performances from Anitta and Burna Boy; cameos from models including Irina Shayk, Cara Delevingne, and Precious Lee; and dozens of more stars to drop in bedecked in Savage X Fenty lingerie. Notably, none of the pre-released photos included Depp, but sources told TMZ the vibe for his look is “cool and chic.”

Of course, this news quickly left social media divided as many were against Rih’s decision to include Depp following his highly publicized abuse allegations. Per my quick perusal of Twitter, one writes: “Rihanna really saw a man that hasn’t used shampoo in months and put him in a fashion show I can’t.” “Rihanna can’t be serious?” another angry fan tweeted. “With all these beautiful and unproblematic men in Hollywood, Johnny Depp is the one that appeals to you the most?”

“Rihanna inviting Johnny Depp to her show is so, so f–king weird. Not a single billionaire on this planet with decency and she’s keeping up the trend sadly,” another disappointed Twitter user complained. On the other hand, a few commenters defended Rih’s alleged decision combating with the fact that Depp was “found innocent” in his court case with Amber Heard. Take a look at some of the reactions below and let us know your thoughts on this? Is this a bad look on Rihanna’s part?

victoria’s secret after calling tmz to tell them rihanna is working with johnny depp pic.twitter.com/BcLrhW3cjJ

rihanna can't be serious? with all these beautiful and unproblematic men in hollywood, and johnny depp is the one that appeals to you the most?

People in the comments saying, "Rihanna this isn't you" like the know her personally. Ffs, she can have whoever she wants in her own show. Johnny Depp proved his innocence and I'm tired of y'all defending a woman who is a proven multiple time abuser. It's weird. https://t.co/JHYSJWl76n

I’ve been following Rihanna since she debuted in 2005 and I’ve been a huge fan ever since. I remember reading her story and I’ve supported her ever since. I’m so proud of her. Seeing her supporting Johnny Depp like this warms my heart. She knows a survivor when she sees one

Crazy to me. Literally in what world. Where is her team? Her publicist? HER BRAIN https://t.co/w8QLrZJluj

Still trying to figure out why Rihanna would chose to take this risk and featurr Johnny Depp in the Savage X Fenty Show. Like, she knowsssss that is going to cause a whole lotta outrage so why even bother?

Rihanna invited Johnny Depp. She understands exactly what went down. They are both survivors!