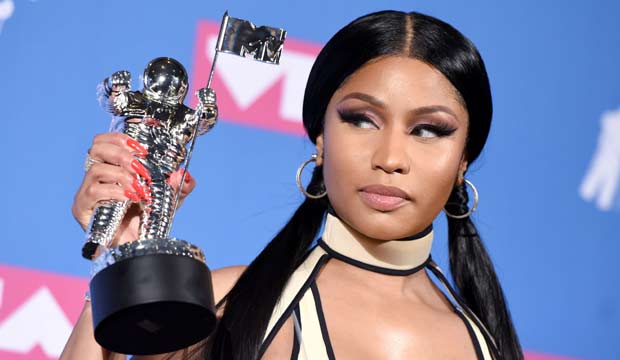 Apparently this is only the third time in VMA history that the show will go two or more years without presenting the coveted video vanguard award… but the real tea is that wasn’t the initial plan.

Nicki Minaj’s loyal legion of minions are disappointed after their “queen” announced that she would no longer grace the MTV Video Music Awards stage this weekend. Nicki Minaj and her husband Kenneth Petty have been dealing with his legal woes as they continue to face off against authorities and Petty’s attempted rape victim. We previously reported that earlier this week Petty officially pleaded guilty to not registering as a sex offender in California and soon after, a Twitter user asked Minaj if she would be at the VMAs, but the rapper quickly shut down the possibility.

“I just pulled out. I’ll explain why another day,” said Nicki before giving a shoutout to Bruce Gilmer, the award show’s producer. “But I love those guys at MTV. Thank you Bruce. I love you so much. Next year we there baby.” This is news arrived just on the heel of the announcement regarding her husband’s charges and may be the reason Minaj decided to take a step back for the time being. Although, it could also be the fact that she doesn’t have her new material out just yet, but for the honor she was reportedly set to receive… she really only would have had to bring out the hits from her catalogue.

That’s right, about two weeks ago a source close to the MTV Video Music Awards production provided us with the tip that Minaj was being set up to receive the beloved MTV Video Vanguard award, an award which previously honored iconic creative work from the likes of Beyonce, Rihanna, Missy Elliott, Britney Spears, Kanye West and more. Many of Minaj’s fans assumed she was planning a performance premiere of her feature with former Little Mix singer Jesy Nelson but this has been debunked as Nelson’s team confirmed to the folks over at DailyMail that Nelson never had a VMA performance in the works for this year. Minaj also through a slight hint yesterday when a fan retweeted an article by Billboard talking about how the Vanguard award was no longer being given out this year, simply tweeting “I think it was #her” referring to Minaj, in which Minaj responded by liking the tweet and later on unliking as the news spread via Twitter.

It’s surprising that Minaj who normally is not shy at all about her insistence on being recognized for her work would decide to pull a way from such an honor, but as mentioned previously it’s more than likely a case of bad timing on multiple fronts. Personally, I don’t know of many Nicki videos that I’d consider along the iconic lines of the award’s previous winner works, but I know one thing, she was almost certainly going to have a kiddie pool on that stage. Are you sad to see Minaj pull out? Do you think she’s a worthy candidate for this honor?

Nicki Minaj reveals she pulled out from performing at this year’s #VMAs.

“Next year we there baby.” pic.twitter.com/ENfi118GL5