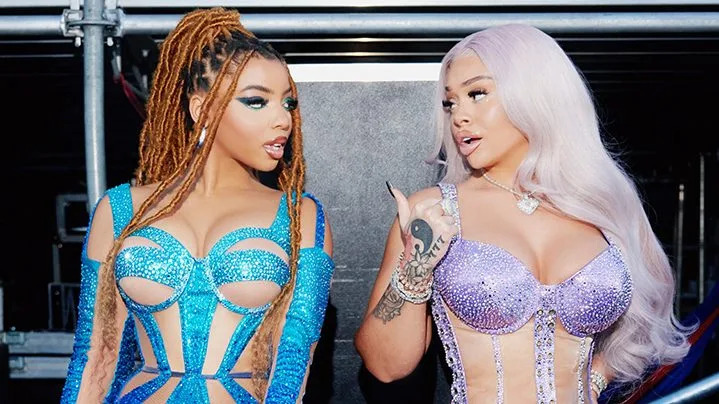 I’ll be honest and say though I’m definitely a fan of Chlöe, after her debut with ‘Have Mercy’ she kind of lost me a little bit with the follow up choices, but baby… this one right here might just be the one because I can’t get it out of my head already.

Chlöe Bailey continues to prove her ability as a solo artist as she drops her latest single “For The Night.” The Atlanta songbird first teased the track months ago when she surveyed her fans on options for her next pending single at that time. Many fans were surprised when despite ‘For the Night’ winning the polls, Chlöe decided to go with the sexy ‘Surprise’ instead, but apparently good things come to those who wait as ‘FTN’ has arrived and I’d say it certainly doesn’t disappoint.

Produced by London On The Track and featuring “Big Energy” hitmaker Latto, Chlöe continues to give her fans the catchy tunes they’re looking for. While the song brings plenty of snappy verses to the table, there’s a deeper meaning to the singer’s lyrics this time that deserves unpacking—especially after she admitted the song was about Gunna. Y’all caught that tea?

The melody shows a defeated 24-year-old artist singing about her hardships trying to find meaningful connections in a world of translucent relationships. She expresses her desire for a deeper bond with the people she cares about, but is forced to make do with single-serving experiences, hence the name, “For The Night.” This is further implied through the music video, which features a cameo appearance from Druski. Though I feel the track could have served with a stronger video, the song is an absolute ear worm that gets stuck in your head on it’s own so I could see this doing pretty well for her if promoted correctly.

Latto’s verse is pretty short, sweet, and to the point but it’s a welcome addition to an already strong track that doesn’t necessarily add or take away from it. What do you think of the new Chloe/Latto collaboration? Is it an instant hit? Take a look at the video below and let us know your verdict. ISSA BOP OR ISSA FLOP?