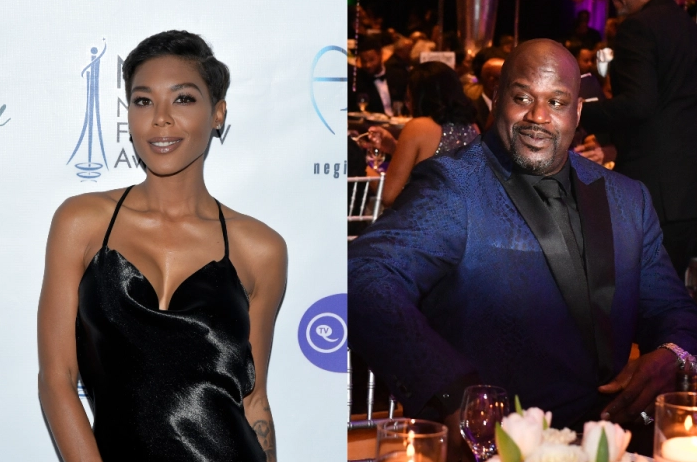 Monique says Shaq’s big ass may have been trying to prove something because his “his hookers” were “upset.”.

If you ever need a good behind-the-scenes story about what the public isn’t privy to, you can always count on Moniece Slaughter to deliver some tea directly to your door step. The former Love & Hip Hop Hollywood star recently she spoke about her previous yearlong relationship with Shaquille O’Neal. After describing what sex with Shaq was like and giving her take on his penis size with the Domenick Nati Show, the interview reached a few blogs. According to Moniece, after Shaq read through one blog, the basketball icon told her to “kill yourself.”

“You know what’s crazy? I haven’t spoken to him in forever and he text me and told me to kill myself,” Moniece updated Domenick at a game night later hosted at her home. “I think what happened was, a lot of his hookers, current hookers, his harem, was upset and he tried to prove [something].”

Then, Moniece went to show Domenick the text messages. “First of all, I have him listed in my phone as ‘Booger.” That was my nickname for him,” she added. Shaq was allegedly upset because she was entertaining other men. “Out of the blue on October 25, he text me because our interview made MediaTakeOut. And so I said, ‘I don’t know why the hell you keep listening to MediaTakeOut.’ So, he text me back, ‘First of all, watch your mouth. You’re the one giving him my p*ssy. That’s my p*ssy and you keep entertaining bum ass n*ggas.'”

I said, ‘That’s not my d*ck.'” Moniece held the text exchange up to the camera and it shows that she also told Shaq, “Well you might want to start providing then. You might wanna start checking on me. Nobody said sh*t to you when you was on a yacht with a b*tch all on the blogs.”

Check out her initial interview and the game night follow-up below.