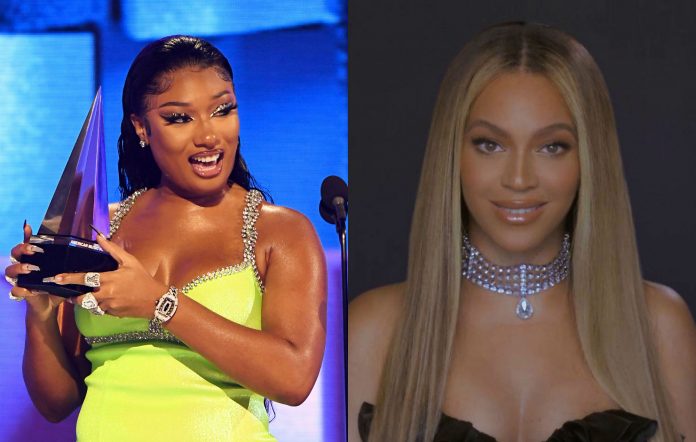 The Hot Girls and the BeyHive may have a meltdown.

The upcoming Grammy Awards may be controversial for various reasons, but it’s a cause for celebration for Megan Thee Stallion. Megan seems to be having one of the best years ever professionally as companies, shows, and her fellow artists are clamoring for an opportunity to work with the rapper. She snagged four nominations for next year’s Grammy ceremony, including Best New Artist, and her “Savage (Remix)” featuring Beyoncé received nods in Record of the Year, Best Rap Performance, Best Rap Song.

Megan recently caught up with the Los Angeles Times to discuss her rising career as well as her forthcoming Grammy appearance. The rapper mentioned that she hasn’t yet chosen her “arm candy” for the evening as her date, but there was a mention about her possibly performing. According to the publication, Megan revealed that she’s “in talks” to grace the stage with Beyoncé for what is sure to drive fans crazy as not only would it be a rare Queen Bey appearance but it would also be their first time performing the song.

The Houston rapper’s No. 1 hit “WAP” with leading hip hop lady Cardi B was also expected to gain a few Grammy nominations, but Cardi revealed that she didn’t submit the track for consideration, wisely deciding to hold off for her album campaign set to begin next year. Megan told the L.A. Times that she didn’t know why her collaborator decided to miss out, but added, “Cardi is a very smart woman, so I never question her decisions. She knows exactly what she’s doing.”

What’s next? Megan looks forward to possibly collaborating with Rihanna and Doja Cat in the future. Would you be here for seeing Meg and Bey hit the Grammy stage? Maybe we can get that ‘WAP’ performance…or both?