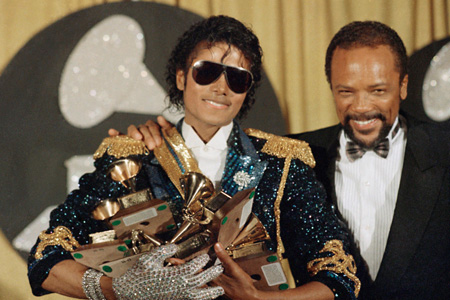 I always say these days kids have no idea what truly legendary artist is, so let me go go ahead and run some numbers from a real GOAT. Michael Jackson’s “Thriller” has been certified platinum for the thirty-fourth time, solidifying his status as The King Of Pop.

There’s a reason why Michael Jackson is widely known as The King Of Pop, and it’s a simple one. His music remains timeless, with many classic singles remaining relevant decades after their initial release. To this day, MJ continues to run numbers, to the point where his Thriller album has been certified once more by the RIAA…

For the thirty-fourth time.

Since its release in November of 1982, the Quincy Jones-produced project housing such singles as “Billie Jean,” “Thriller,” “Beat It,” and “Wanna Be Startin Somethin,” has gone on to sell a total of thirty-four million albums, placing him second only to The Eagles and their Greatest Hits Collection (38x platinum).

His diamond Bad album also secured another RIAA certification, upgrading from 10x platinum to 11x. Originally released in August of 1987, the project featured another slew of timeless Jackson hits, including the title track, “Dirty Diana,” “Smooth Criminal,” “The Way You Make Me Feel,” and many more. Speaking of hits, his Number Ones album also gained ground, locking down a fifth platinum certification.

When it comes to replay value, it’s evident that few artists can rival the sheer scope of Michael Jackson’s catalog. Say what you will about his legacy, but there’s something undeniably universal about his music, with many songs from both Thriller and Bad having solidified themselves as dancefloor mainstays for a wide variety of generations. One has to wonder if any pop star of today will be able to come closer to matching MJ’s commercial dominance; while some artists like Lil Nas X may come close with a single song, few can boast Jackon’s consistency across the board.

Are you still keeping tunes from Thriller and Bad on rotation?