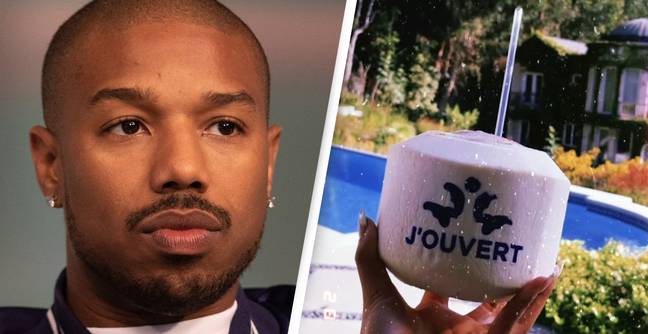 Well, it looks like everyone’s boyfriend MBJ may have more things to worry about the a little shade from Fertile Future over Lori Harvey. He’s facing backlash for naming the brand “J’Ouvert” Rum, a word that has specific connotations in Trinidad and Tobago.

Michael B. Jordan is the latest member of Hollywood to expand his portfolio into the alcoholic beverage industry. He joins Snoop Dogg, Jay-Z, Diddy, and others in his new venture into the spirits industry, but few have faced the almost instantaneous backlash Jordan is for his new J’Ouvert Rum brand.

Jordan is facing accusations of cultural appropriation by critics of all backgrounds, but especially those with Caribbean roots for naming the brand J’Ouvert after launching it on Sunday (June 20). Proud girlfriend Lori Harvey shared a series of snaps of the couple celebrating the launch, including one that provided a close look at a boxed set that included Jordan’s inspiration for naming the brand.

The description on the box for the rum reads, “Derives from the Antellian Creole French term meaning ‘daybreak,’ J’OUVERT originated in the pre-dawn streets of Trinidad, as celebration of emancipation combined with Carnival season to serve as the festival informal commencements. Crafted on those same islands, J’OUVERT Rum is a tribute to the party start.” Shortly thereafter, the rum started raising eyebrows by users across social media.

“Modern day j’ouvert may look fun to you because of all the music and mud and paint but if you knew anything about the vitality of trinbagonian people or west indian people it’s that through all we been through we celebrate our past and ancestors with jubilation,” explained one Twitter user. “we’re happy people despite it all. just because a festival or aspect of our culture looks fun and inviting does NOT mean it’s yours to take. everything here has a dark past but we make due in honour of those who came before us. respect it and leave it alone.”

What’s next? A free doubles with every #JouvertRum purchase?! 🥴😭 someone point out Michael B Jordan’s Trini roots fast for me please!!! Cuz I’m not understanding this shit. Is it his grandma who makes the rum cakes??? pic.twitter.com/7Q8E1uowmU

Other users argued that using the word for a rum brand strips it of its sentimental value. Another user reports that the logo on the J’Ouvert Rum’s swag box depicted three islands, although Trinidad & Tobago is a two-island nation.

The official rum brand’s official page J’ouvert has since been made private, and both Jordan and his girlfriend Lori Harvey have erased all traces of their launch from social media following the backlash, although they live on through screenshotted content.

I just noticed the shape of the logo and ????lmfao who is his business partner because in its face, this is a little strange pic.twitter.com/wXDjLlLaFh

ICYMI Michael B Jordan has launched a rum brand called J'ouvert & has filed a trademark for the word J'ouvert. In his filing he says the word "has no meaning in any language" I am livid.

I was hot when I saw the first tweets this week cause of the nerve of him, but for him to say the word has no meaning is beyond insulting and disrespectful to West Indians. What word doesn't have a meaning? He's basically saying he doesn't acknowledge its cultural significance.

imagine trying to explain what jouvert is to someone and they go “oh michael b jordan rum” 😕 https://t.co/kmTtYuBRYb

The Minister of Trade and Industry in Trinidad and Tobago, Paula Gopee-Scoon, has already weighed in on the matter, saying, “The first thing is to gather the information to see if it is in fact so. Then working together with the intellectual property office of the Ministry of the Attorney General, we’ll do the necessary investigation…”

Michael B. Jordan has yet to speak out about the situation. I think this is another one of those situations where education is important. I highly doubt Michael B had any malicious intent, however, this is also why it’s important to do proper research before doing business..so it could be a case where simply educating him may see a different outcome than attacking him would. Thoughts?

Michael B Jordan never been to jouvert or mass. But has the nerve to want to profit off West Indian culture and call it Jouvert Rum…. pic.twitter.com/RT8O3InIwm

Michael B Jordan got to trademark “j’ouvert” and it was allowed?
When Kim K tried to trademark Kimono what happened?
Nah, sumn haffi do

Trinbagonians didn’t even get to make money from Carnival this year and probably not even next year and Michael B. Jordan and friends are over there doing what?! I have to laugh lmao pic.twitter.com/XcC6ljGmWU