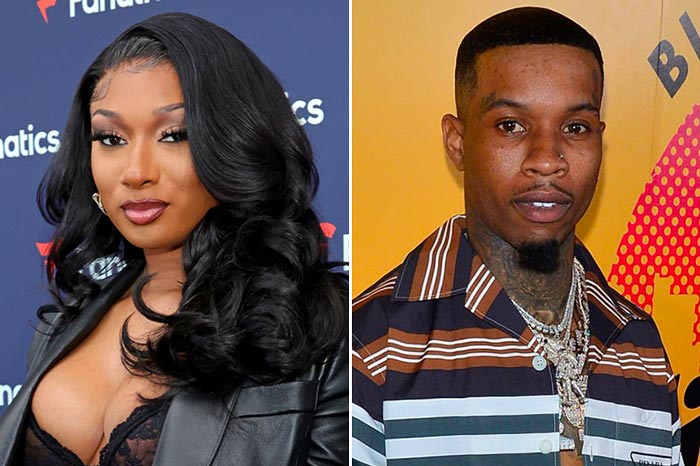 You know what, I’ll give one Tory Lanez one thing.. for a 5’3 man who could possibly be deported and/or allegedly harming a woman, it certainly takes a whole lot of nerve and audacity to continue to troll her online while the case is still ongoing.

Over the past few days (see previous posts), the fire has been ignited in the case of Tory Lanez and Megan Thee Stallion’s shooting case. When Megan was shot in the foot in summer 2020, she alleged that the compact rapper was the gunman responsible, but Tory insisted that was untrue.

Now, as they were intended to have a pre-trial hearing for the case this week, Tory and Meg have been at a war of words over Twitter and Instagram the last few days. Tory and hip-hop insider DJ Akademiks had announced that DNA reports showed no results of Tory Lanez’s DNA on the weapon that was fired at Megan Thee Stallion. However, Meg fiercely denied these claims, and insisted that the courts had ruled the findings inconclusive.

The official pre-trial hearing has been moved to April 5, and the conflicting reports have blurred the truth of the matter until that day comes. Lanez continues to insist that he has been cleared of DNA evidence on the weapon, and returned to Twitter on Feb. 24 to double down. He started by responding to the tweet about DJ Akademiks’ reporting being false, saying that he has the documents that prove his case in his possession: “How they false if I’m looking at them?”

Next, in now-deleted tweets, he says the semantics of Black men vs. Black women has negatively affected his case and that Meg’s team forced her to turn on him after the shooting confusion, and wishes they could have stayed friends: “They used this narrative to separate black women from black men. They made it so the protection of a black woman suddenly meant the unprotecting of black man….. Funny cuz it was right when for the first time we were all somewhat standing together for the same cause. They lied to someone I thought was my friend .. they coerced her into digging a hole that’s now going to look crazy to the whole community she riled up . She’s not at fault .they are . And it’s sad cuz they truly don’t care what happens to her when it’s all said and done …” 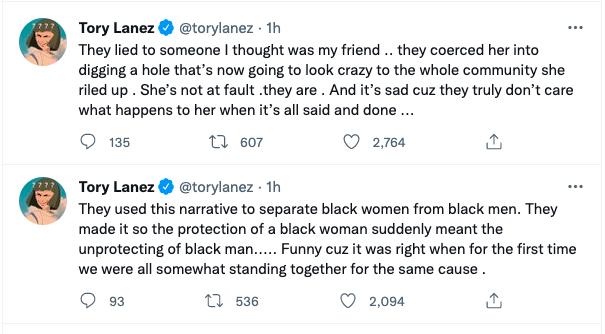 Tory and Meg are both standing their ground, and the court of public opinion is left to choose their sides until the law is laid down later this year. What do you guys believe at this point?