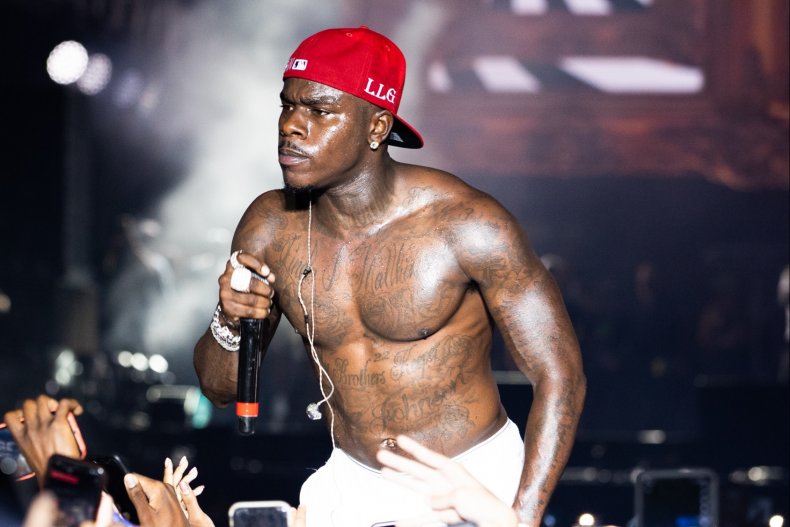 Well, while it looks like DaBaby was able to dodge the hell out of that shoe that was launched at his head during his ‘Rolling Loud: Miami’ set, he may not be able to do the same with the backlash coming his way for this random and unnecessary outburst during that same little number.

DaBaby is not stranger to controvery what so ever and apparently that won’t be changing anytime soon. The ‘Blame it on Baby’ rapper made plenty headlines following his Rolling Loud festival performance in Miami yesterday, mostly for a shoe being launched at him, performing Megan Thee Stallion’s record ‘Cash Sh*t’ solo despite their recent beef, and even bringing out her nemesis petite rapper Tory Lanez as well. However, it was some disgusting remarks about HIV positive people and gay men that seem to be generating a ton of backlash for the rapper via social media.

Social media wasted to time condemning the rapper for his vile comments. One Twitter user made a great point writing, “DaBaby being homophobic talking about spreading HIV/AIDS while performing in front of a crowd of 1000s of ppl in a global pandemic is a juicy contradiction.” Another said: “DaBaby: Black Lives Matter UNLESS you’re gay, have HIV AIDS, or are a woman. Police brutality is bad, but shoot your girlfriend in the foot during an argument? BRING THAT MAN UP ON STAGE.”

Everybody involved going to hell pic.twitter.com/o1zCeKYOde

During his set, a member of the audience threw their shoe at DaBaby. Whether it was in response to his unncecessart comments or the fact he brought Lanez out on stage is yet to be confirmed, but – in the words of Twitter user @BlackMajiiik: “Blessings to whoever threw that shoe at DaBaby. May your socks always find their match and your headphones never die when you leave the house.”

What makes this so sad, it that nothing Baby said had anything to do with the music he was presenting on stage, like, why was HIV, Aids, or men giving oral on your mind at this particular moment? Take a look at the footage along with many of the reactions below and let us know what you think of this mess.

Blessings to whoever threw that shoe at DaBaby.

May your socks always find their match & your headphones never die when you leave the house.

To all the people LGBTQ+⚧ 🏳️‍🌈and people who living with HIV/AIDS that @DaBabyDaBaby offended at #RollingLoud just know you are loved and you are important NEVER let anyone especially this clown tell you anything different because In GODS eyes he loves you. #DaBaby @Interscope

And y'all still support him pic.twitter.com/pSkpwPLEIQ

Dababy did that ignorant, misogynistic and homophobic rant unprovoked. pic.twitter.com/kodCSbRCcn

The fact that DaBaby bringing out Tory Lanez is the headline and not his homophobic comments and jab at people with HIV/AIDS says everything I need to know about this trash ass society.

DaBaby homophobic? Sir…that’s it. “If you ain’t come with HIV/AIDS or any other sexually transmitted diseases…If you niggas ain’t suck dick in the parking lot..” nigga, why do you care? Now that’s sus.

DaBaby is homophobic, misogynistic, sexist, and abusive. If calling him short is problematic well damnet cancel me bc that lawn gnome needs to go. pic.twitter.com/PcQP56YujZ