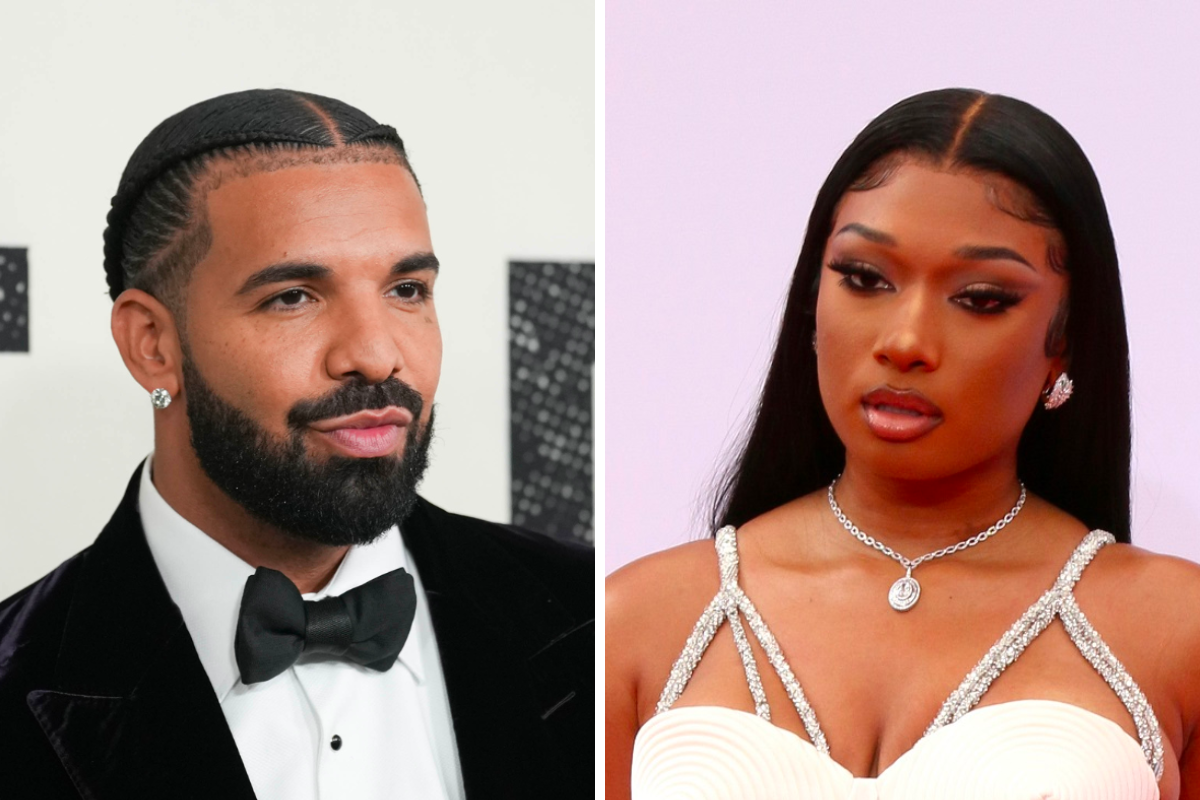 Y’all know that meme that’s been going around where it’s like “think of the messiest b*tch you know… it’s a man ain’t it?” Drake decided to slick his hair back, suck in his Lipo tummy, and put on his sassy cape while apparently doing his best to prove that right.

Following the release of Drake and 21 Savage’s album, Her Loss, fans are taking notice with a particular line… and not in a good way. On the record’s ninth track, “Circo Loco,” Drake drops what appears to be an obvious diss towards Megan Thee Stallion. “This b*tch lie ’bout getting shot but she still a stallion,” he says.

Needless to say, it caught fans off-guard in defense of Megan. The line is a reference to Megan’s assault trial against pint-sized rapper Tory Lanez from an incident that occurred in 2020, with the charges being that he shot her. In September, the trial was delayed while his little legs remained detained under house arrest, but that hasn’t stopped people like Drake from choosing sides, and very publicly at that.

In March, there was rumored tension between Meg and Drake, after he allegedly unfollowed her on Instagram. Now,  it’s safe to assume Drake is making his stance even clearer. Megan didn’t waste any time defending herself and has since replied on social media.  “Stop using my shooting for clout b**ch ass N****s! Since when tf is it cool to joke abt women getting shot ! You n****s especially RAP N****S ARE LAME! Ready to boycott bout shoes and clothes but dog pile on a black woman when she say one of y’all homeboys abused her”

What’s bothersome about this whole thing for me, is how quickly these men, particularly those in the public eye dismiss a woman’s claims of abuse when surely they wouldn’t have that energy if it were their mother, sister, cousin, or anyone that they care about.

This trend of dismissing and discrediting Megan is so cringe. Like, if you all know something that we don’t, then expose it. Otherwise, stop throwing shots at girls in songs and tweets and mind your business until the facts roll out in court before everyone’s looking at you like an even bigger ass than they already are. Take a look at the mess for yourself below and let us know your thoughts.

Drake hints that Megan Thee Stallion lied about getting shot by Tory Lanez in his new song “Circo Loco" off #HerLoss album. pic.twitter.com/H00jt0kGEI

I know I’m very popular but y’all gotta stop attaching weak ass conspiracy theories in bars to my name lol Niggas nor hoes EVER address me or @ me WITH a fact or receipts. I AM CLOUT BITCH keep sucking my pussy

A stallion is slang for a TALL THICK WOMAN https://t.co/HQr2mT6vR3

Stop using my shooting for clout bitch ass Niggas! Since when tf is it cool to joke abt women getting shot ! You niggas especially RAP NIGGAS ARE LAME! Ready to boycott bout shoes and clothes but dog pile on a black woman when she say one of y’all homeboys abused her

People attack me y’all go up for it , i defend myself now I’m doing too much … every time it never ends and this did NOT happen until I came out and said I got shot … y’all don’t fwm okay cool fuck it bye

… i’m actually disgusted how so many male artists are against megan. what are we on our third name drop? fuck drake. https://t.co/DAydSApl59

me listening to drake’s album until i heard the line about megan… pic.twitter.com/MDuxyBvx0W

“Think about the messiest bitch you know – it’s a man ain’t it” pic.twitter.com/ucQmHYIzR4

nicki seducing drake in the studio to sneak a megan diss in his verse pic.twitter.com/i87y24ixdj

Drake did that shit on purpose to, He's well aware he has the widest reach of any rapper in the world. Randomly attacking that girl is supposed to mobilize his fans to support Tory Lanez and harass Megan

This is how women end up dropping cases when major celebrities are accused.