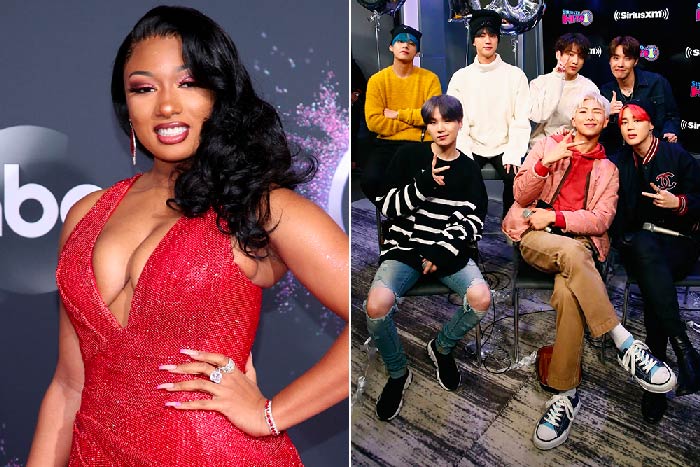 Now y’all know everything that BTS releases shoots straight to #1 and remains there for 300 years, so it would’ve been a damn shame if Carl would’ve been able to block that type of reach for Meg.

While Megan Thee Stallion has been scoring Grammys and plaques, among other accolades, she’s also been in a nasty legal battle with her label 1501 Certified Entertainment. It all began when she attempted to renegotiate the terms of her contract which she signed when she was only 20 years old. Unfortunately, the two parties have yet to come to terms on any agreement which apparently continues to impede Meg’s release schedule.

According to TMZ, Megan Thee Stallion is accusing 1501 Certified Ent., and its founder Carl Crawford, for reportedly attempting to block the release of her upcoming collab with BTS. The rapper said that she’s featured on the remix to “Butter” which was scheduled to drop this Friday. However, she said that 1501 could prevent that from happening if they decide to block the release.

Meg said that this collaboration is a massive look that could help her breakout even further in international markets since the BTS fanbase runs deep. However, she said that 1501 has attempted to talk her out of releasing the single because they don’t think it would be beneficial to her career. Megan claims this is simply an excuse in an attempt to get a six-figure check off of her by paying them off to release the song.

Last year, Megan Thee Stallion managed to get a court order that prevented 1501 from blocking the release of new music. She ultimately was able to release her debut album Good News because of that but she said that the label breached the court order.

Megan requested a judge intervene in order to release the single on schedule and ended up getting the all-clear to release her remix with BTS as according to docs, the judge ruled in favor of Meg.

Clearly 1501 must not be getting the cut they want from Megan to still be attempting to stop her bag. I can’t imagine anyone in business not wanting to see the results of what a BTS collaboration could do for Megan. What do you think of all of this? Do you think they’re wrong is this simply just business after signing a bad contract? I personally don’t think anyone should work as hard as these artists do and be expected to take the shitty end of this stick. Are you excited to hear a Megan/BTS collab?