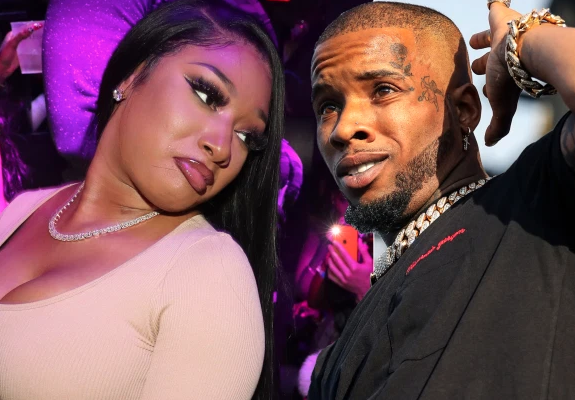 Is this little munchkin being sent off Oz soon for his alleged crimes?

A lot has been said about pint-sized Toronto rapper Tory Lanez in the last year. The “Broke In A Minute” artist was charged in connection to Megan Thee Stallion’s shooting last year despite his best attempt to discredit the Houston rapper by calling her a liar and clear his name on his Daystar album, and he continues to be one of the most divisive figures in hip-hop. On Tuesday night, speculation hit a new high after Tory cleared his Instagram page and told his fans, “It’s been real.”

Many aren’t sure what to make of Tory Lanez’ latest move after the rapper disappeared from Instagram, seemingly deactivating his page, and appearing to share a “Goodbye” message on Twitter. “It’s been real,” he simply wrote on the platform, with no further explanation.

Immediately, fans began to assume that Tory was about to be sent to jail for allegedly shooting Megan Thee Stallion. “Guess who’s goin to jail tonight” was a popular comment under the tweet, quoting Kanye West’s song “Jail.” Others are speculating that Tory is simply taking a break from social media after suppsosedly banking millions of dollars on his NFT endeavors, calling it quits for the rest of the year.

Tory certainly didn’t help his case with his surprise appearance at Rolling Loud in Miami a couple weeks back. Popping out during DaBaby’s ill-fated set to perform their collaboration, “Skat,” Tory was thought by Megan’s team — and by local police — to have violated the restraining order against him, a thought the court agreed with. Because DaBaby’s set was immediately after Meg’s, Tory would have been backstage and within the restraining order perimeter at the same time as her. Although there’s no additional information concerning his “It’s been real” tweet, fans believe that he was at least found guilty of violating the restraining order and will soon face penalties over it.

What do you think is going on with Tory Lanez? Check out the post below followed by a few reactions.

Tory Lanez and his glued on toupee finally going to jail pic.twitter.com/Sl6tCpDaSd

First day of fall AND Tory Lanez is going to jail?

tory lanez having to go to jail over violating his restraining order after being all big and tough with the other midget is the funniest shit to happen in 2021. little men always think they’re above the law 💀

the downfall of tory lanez right in front of my eyes i been waiting for this one pic.twitter.com/nPdwFSVdjJ