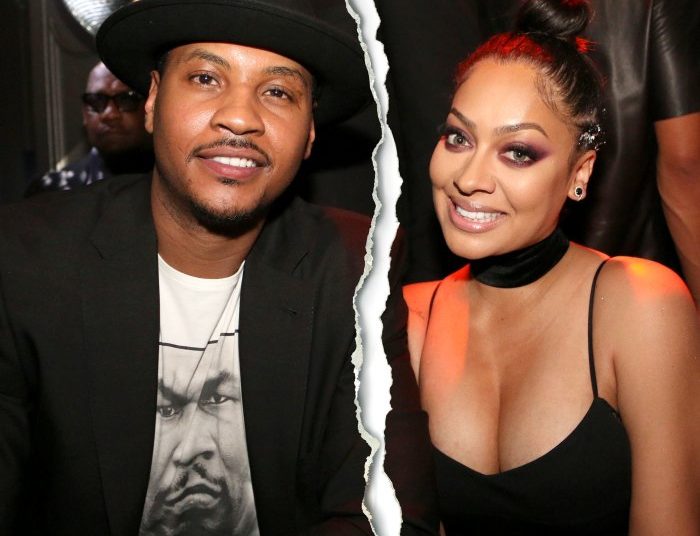 I really don’t understand why everyone is acting surprised, I feel like Carmelo and La La having been going through it just as long as they’ve been together, so none of this behavior nor the divorce filing is surprising.. but let’s go ahead and get into this latest little piece of tea.

After 11 years of marriage, Carmelo and La La Anthony are pulling the plug on their relationship. I previously reported on the news that La La filed for divorce from her NBA star husband, citing “irreconcilable differences” as the reason behind the split. This comes days after rumors circulated that Carmelo was involved with another woman, and now the folks over at Hollywood Unlocked has got ahold of alleged messages between the basketball star and a woman who claims she just gave birth to his twins. Yes, you read that correctly.

According to the outlet, they spoke with the woman (she wanted to keep her name private) who said she’d allegedly met Carmelo last year in New York. She claims they kept in contact and spoke “almost every day,” eventually meeting and engaging in a sexual relationship.

The woman was aware that Melo was a married man but she didn’t feel guilty about it because she allegedly knows “who’s f*cking La La too!” Then, the woman later learned she was pregnant and she and Carmelo planned for an abortion because neither one of them wanted to move forward with children. However, things didn’t work out, so she reportedly ended up giving birth to his twins in April prematurely.

One of the newborns allegedly had severe health problems but the woman wasn’t able to get into contact with Carmelo. She claims he later told her that he broke his phone after throwing it against a wall. She also shared text exchanges allegedly with Carmelo where he seems to acknowledge that the children are his.

She told Hollywood Unlocked that she’s struggling to get Carmelo’s attention and hopes that this story will make him keep in contact. *(Good luck with that, girl)

Considering La La and Carmelo have been separated for a while and obviously doing their own thing with other people, I don’t see this really being a huge deal of a scandal but I do completely understand why it may be the final nail in the coffin for La La to go ahead and file for divorce, if true. Check out the woman’s messages. Do you believe Melo has a new set of twins out here?