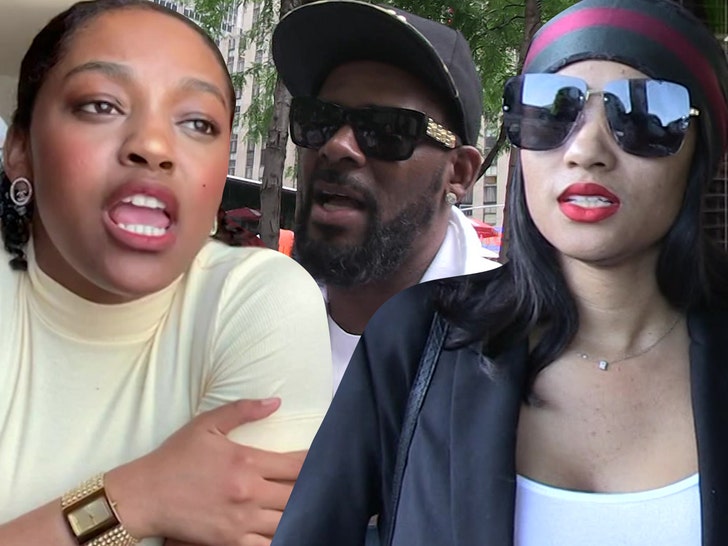 This is a pissy ass mess. Azriel Clary said she would report Joycelyn Savage to the police for having sex with her as a minor.

This is wild. R. Kelly is celebrating his birthday today and, for the occasion, his girlfriend Azriel Clary travelled back to his Chicago apartment to retrieve her belongings so she can enjoy a fresh start in Los Angeles. She decided to share the freeing experience with her followers on social media, filming a live-stream on Instagram and butting heads with Kelly’s other girlfriend, Joycelyn Savage, on camera. The two not only had a heated argument but they also came to blows, engaging in a full-fledged brawl with all the action heard clearly in the background.

Today’s a good day to go to jail. I know where the skeletons are buried. You wanna play chess, let’s play (: for the entire world to see. 🕵️‍♀️🪓

As reported by TMZ, Chicago police responded to a reported battery at R. Kelly’s condo in the Trump Tower shortly after Azriel and Joycelyn got into a physical fight. Joy and Azriel can be heard calling each other names before it was uttered that, while Savage was of legal age, she engaged in sexual intercourse with Clary. The only thing is that Clary was still a minor at the time and, during the fight, Clary says that she’s down to press charges against Savage for that fact. “You were sleeping with me as a minor,” yells Clary on camera before she gets restrained by two other people in the room.

This is one of the craziest developments in this ongoing story since, just yesterday, Azriel Clary admitted that she still speaks to Joycelyn Savage regularly. Watch the footage below.