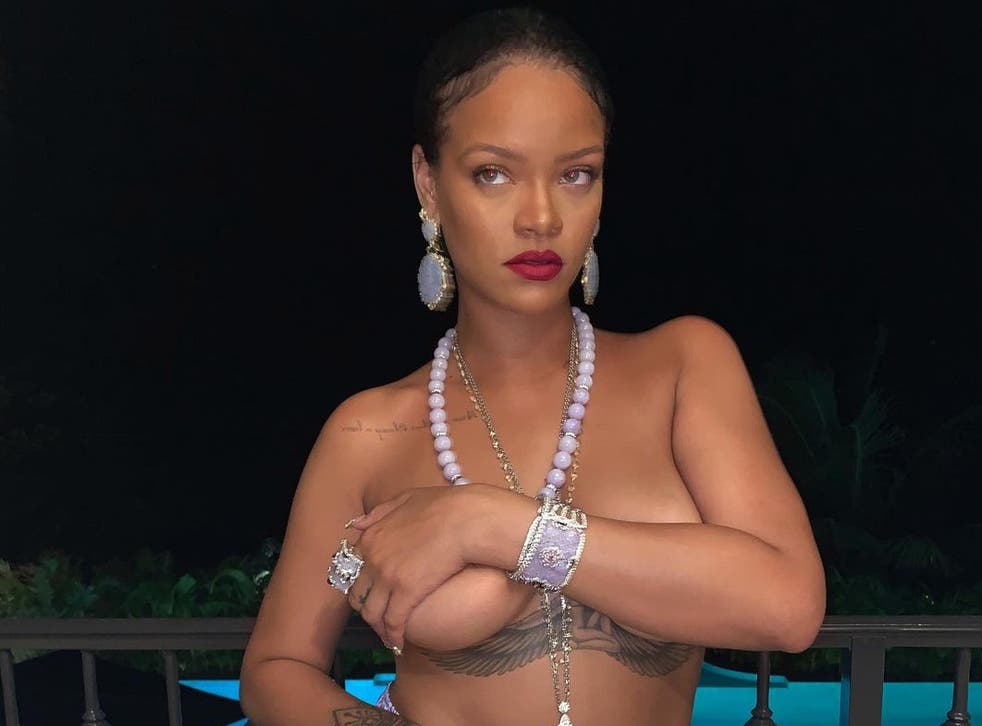 Lord, some folks are upset with our girl Rih and this time it’s not even over the absence of music. Apparently, she’s being called out for ‘cultural appropriation’ after posting a topless picture of her wearing a Hindu deity necklace.

Rihanna has drawn some unwanted attention from the internet again, angering members of the Hindu community by sharing a recent topless picture of herself wearing a deity necklace.

Posting what she likely considered as a harmless thirst trap, that I happen to think she looked amazing in, Rihanna shared a topless picture of herself on the balcony, using her arm to cover her bust. She quoted Popcaan in her caption and rocked a pair of satin shorts from her lingerie collection. Around her neck were several necklaces, including a diamond-studded pendant with the Hindu god Ganesha.

“You’re wearing a deity necklace and a Murthi [image of a deity] of my culture that’s already been culturally appropriated enough,” wrote one person in her comments section. “How is this OK when a person has more than enough resources to at least find out the meaning and significance of the chains and the pendant around their neck?”

After getting kicked out of Sheikh Zayed Mosque for provocative behavior, nearly using the Islamic Hadith for her lingerie brand, posting an offensive photo shoot outside a Hindu temple for SavageXFenty, Rihanna wears the Ganesha necklace inappropriately on her Instagram page.

okay but are we not going to talk about Rihanna wearing a Ganesh pendant in her picture that she posted today? Hindu appropriation is not an AESTHETIC!!!

You can love Rihanna and still call her out btw. https://t.co/yBeIIK6LtP

The sentiment has been echoed across the internet as thousands of people speak up about Rihanna’s picture, accusing her of cultural appropriation for the second time in less than a year.

Last year, Rihanna issued an apology after using an Islamic hadith as the soundtrack to her Savage X Fenty fashion show. “I’d like to thank the Muslim community for pointing out a huge oversight that was unintentionally offensive in our savage x fenty show,” she said in October 2020. “I would more importantly like to apologize to you for this honest, yet careless mistake. We understand that we have hurt many of our Muslim brothers and sisters, and i’m incredibly disheartened by this! I do not play with any kind of disrespect toward God or any religion and therefore the use of the song in our project was completely irresponsible! Moving forward we will make sure nothing like this ever happens again.”

This is yet another incident that people are calling her out for, which doesn’t look good for the billion-dollar beauty. We’ll keep you posted on Rihanna’s response to this matter when/if it comes. While I personally think the picture looked amazing I think it’s important to remember here that if we aren’t someone who would be offended by this in the first place, it’s not our place to tell these people they should or shouldn’t be. What do you guys think?

There’s rightful outrage on my TL right now over a photo Rihanna posted where she’s half naked, promoting her lingerie line, while wearing a necklace of Ganesh, a Hindu god. It’s 2021 and by now we should all understand that religion is not an aesthetic.

I dont know who needed to hear this but no it's not okay for Rihanna to use the hindu religion as an aesthetic even if it's Rihanna.❤

y’all can’t keep defending Rihanna! She’s being extremely disrespectful to the religion Hinduism and to Hindus! I’m sorry that you all have to see your religion blatantly disrespected in that way! All love from me💗

You can love Rihanna and still call her out btw. https://t.co/yBeIIK6LtP