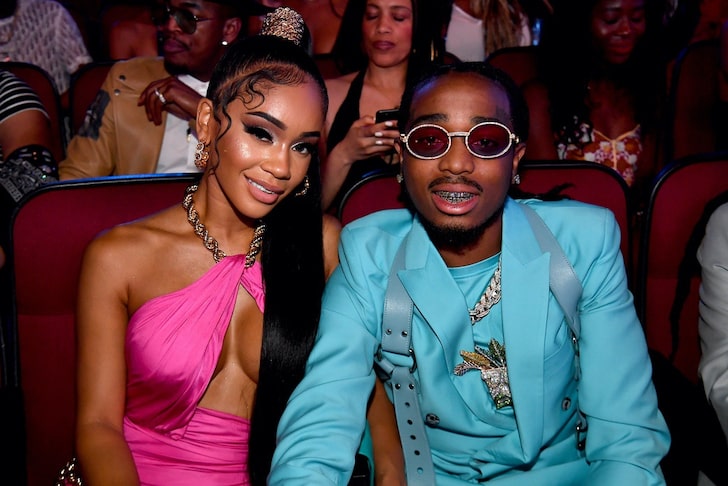 Well, a wise woman once told us “of course sometimes shit goes down when there’s a billion dollars in the elevator.” Well, apparently that rings true for a couple milli in transit as well.

The world is reacting to a video that surfaced today showing rappers Quavo and Saweetie getting into a physical altercation inside of an elevator. The video was shared within the last hour and Quavo and Saweetie are both trending on social media as a result.

The video was reportedly taken before they broke up. It shows Saweetie and Quavo outside of an elevator in a North Hollywood apartment complex. It starts out with Saweetie seemingly throwing a few punches in Quavo’s direction. The Migos rapper dodges the punches, dropping his orange Call of Duty briefcase. He then shoves Saweetie into the elevator before they struggle over the briefcase. Quavo gains control as his girlfriend drops to the ground. She didn’t get up and was possibly injured. The elevator then starts to take them up while Quavo does nothing to help Saweetie get up. He periodically looks over at her on the ground before the elevator door opens. A man is standing in front, looking in and deciding not to come inside.

Eventually, they get to their floor and Quavo gets out, placing the briefcase in front of the door so it doesn’t close. Quavo stands in the doorway, looking at his girlfriend as she remains on the ground. Again, he does not help her up. After about twenty seconds, she stands up and limps out of the elevator.

It is not clear what lead to the elevator altercation but that hasn’t stopped the internet from already coming at Quavo’s neck while the footage spreads like wildfire. The disturbing video is still fresh and people are sharing their reactions after watching it. While it’s still early, Saweetie has been getting a lot of support as people are clowning anyone that comes to Quavo’s defense.

Check out some of the tweets below and let us know what you think of the situation. All I have to say…is March has truly been ghetto. Who keeps leaking all this elevator footage?

I really thought saweetie and quavo were this perfect couple pic.twitter.com/rWeijaXiix

Solange wondering why she’s trending with Quavo and Saweetie: pic.twitter.com/PxbnW584gW

Saweetie need to take lessons from solange 💀. Have that nigga Quavo on the elavator hyperventilating pic.twitter.com/DdbJFWCUqA

It’s crazy how celebrities make their relationships look so beautiful on social media then BOOM! TMZ footage of a scuffle inside an elevator. Solange beating Jay-Z over Beyonce, Ray Rice and his shorty, Quavo and Saweetie. Sh*t’s wild.

That elevator video w/ Quavo and Saweetie …….. wild. Glad they aint together no more. Clearly their relationship only look good on the gram.. it was toxic and abusive asf..