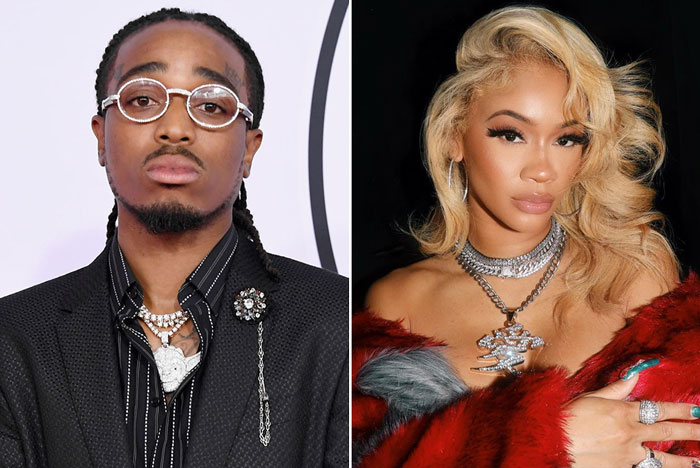 Though music isn’t exactly her strong suit, Saweetie wasted no time channeling all of her recent breakup drama in her… craft.

It was a sad day for their fans when one of hip-hop’s cutest couples, Quavo and Saweetie, split and we began to hear more about the breakup than we ever did their relationship. Their split has brought cheating accusations and elevator tussle videos to the forefront as each party insults the other to their millions of followers. Quavo previously previewed a new song where he took a shot at his ex-girlfriend (“She slimy and she sneaky / Takin’ back that Bentley,”), but I guess two can play the lyric game even if one of them isn’t very good at it.

Saweetie just released her brand new summer playlist, titled Pretty Summer Playlist, highlighting a bunch of lesser-known artists including Lourdiz, Kendra Jae, and more. On her new record “See Saw,” Saweetie comes for Quavo without holding back, making all types of claims about their relationship and bringing back the cheating accusations.

“Feelin’ dangerous, I thought you was my anchor,” she starts rapping in the second verse of the song. “But you ain’t sh*t and on some real sh*t, tell me what the problem is/Say he gon’ do better but it’s always just the opposite/How you fumble the baddest b*tch, are you a dumb n***a? You got nerve selling me all these threats when you wrong, that’s a big trigger/How you figure? Ain’t the woman that you thought? You was humpin’ thots, f*ckin’ narcissist, you just mad you got caught.”

Recently, Saweetie came through with some clear shade at her ex-man on social media, sharing a promotional video for her new team-up with sunglasses brand Quay Australia. In the video, she teaches her fans how to pronounce the brand’s name, throwing a clear shot at Quavo in the process. So apparently this may be a thing for a while.

What do you think of Saweetie’s new song, with lyrics directed at Quavo? Take a listen below and let us know what you think.