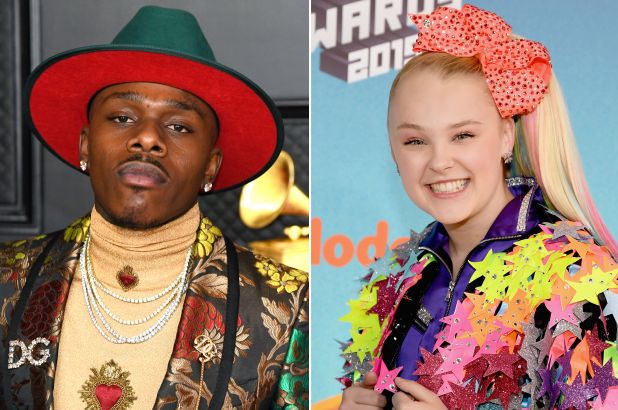 I bet these are two names you never thought you’d see in headlines together…let alone twice.

DaBaby had one of the most exciting performances at the Grammy Awards on Sunday night, but apparently it had a chance to be even more entertaining. According to the rapper, who was interviewed by Entertainment Tonight before the ceremony, he actually tried to get JoJo Siwa, whom you may remember some thought he dissed in a freestyle earlier this year, to perform with him and publicly acknowledge that he doesn’t have any beef with the child.

@itsjojosiwa my 3 year old princess is your number 1 fan. I bought her every product you have out. She think she you.😂

Don’t let em trick you into thinking id ever have a problem with you. My word play just went over their heads.

All love on my end shawty, Keep shinning! 💝

For those unfamilair, Out of nowhere, DaBaby angered some fans when he randomly used JoJo Siwa for a bar, where to those who didn’t catch the word play, left many assuming he was calling her child star a “b*tch.”. “Got a big .45 on decock, Usin’ big words like I’m T.I., Don’t wanna get me started, n***a, Turn me up, n***as gon’ see why ,N***a, you a bitch, JoJo Siwa (Bitch).” So, obviously I think the intention was a play on JoJo’s last name Siwa and “SEE WHY,” and DaBaby’s first name being Jonathan, but apparently that went over a lot of folks head and all they heard was JoJo’s name followed by the word b*tch.

A few people thought it was funny, many just chalked it up as clever word play, but some claimed it was weird that he would go after a 17-year-old while others compared her net worth to his, as well as their heights. According to Google, Jojo Siwa is 5’9″ while DaBaby stands at 5’7″. Baby later attempted to calm things down and told the world that he had no issues with the 17-year-old. “@itsjojosiwa my 3-year-old princess is your number 1 fan,” he said on Twitter a few weeks ago. “I bought her every product you have out. She think she you. Don’t let em trick you into thinking id ever have a problem with you. My word play just went over their heads. All love on my end shawty, Keep shinning!”

During his interview with Entertainment Tonight, DaBaby addressed the issue another time, clarifying that there are no problems between himself and Siwa and telling fans that he actually tried to get her to perform with him at the show.

“I actually reached out to see if she wanted to perform with me at the Grammys,” said the North Carolina-bred rapper on the red carpet. “But I heard she’s somewhere working on a project of her own. I won’t say too much. I don’t want to put her business out there. She’s somewhere filming something, though, but I definitely reached out.”

Take a look at the clip in below. Would you have been here for seeing JoJo hop on stage Baby? What exactly would they have done? Now, I’m curious. (lol)