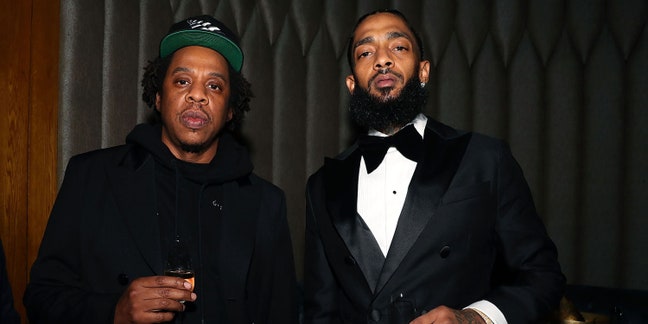 One has to wonder what a visual for this record would’ve been like if both artists were still here to make it happen.

Next month marks the two-year-anniversary since Nipsey was gunned down in front of his Marathon Clothing store in Los Angeles, and his memory has been kept alive through his art, community initiatives, and business partnerships managed by his loved ones and estate. Earlier this week, we received news that Nipsey and Jay-Z had a collaboration on the horizon, and right on time, it’s arrived.

“What It Feels Like” comes courtesy of the Judas and The Black Messiah soundtrack as it helps to lay the foundation of the powerful film starring Daniel Kaluuya and LaKeith Stanfield. The track is as impactful as the Black Panther-centered film, Towards the end of the second verse, Hov touches on one of the main characters in the film, Fred Hampton. Hampton was the chairperson of the Chicago chapter of the Black Panther Party in the 1960s and was assassinated on Dec. 4, 1969—the day Jay-Z was born—during an FBI raid. Hampton was betrayed by former associate William O’Neal, a federal informant.

Quotable Lyrics:
Better days pray for but expectin’ worse
At this level, bullsh*t, I’m just less concÐµrned
Cruisin’ in the 6, lookin’ at the proceeds of rap music on my wrist
Drop anothÐµr mixtape, my sh*t boomin’ out this b*tch
Young Malcolm, I’m the leader of this movement out this b*tch

Take a listen to “What It Feels Like” by Jay and Nipsey below and let us know what you think of this collaboration. ISSA BOP OR ISSA FLOP?