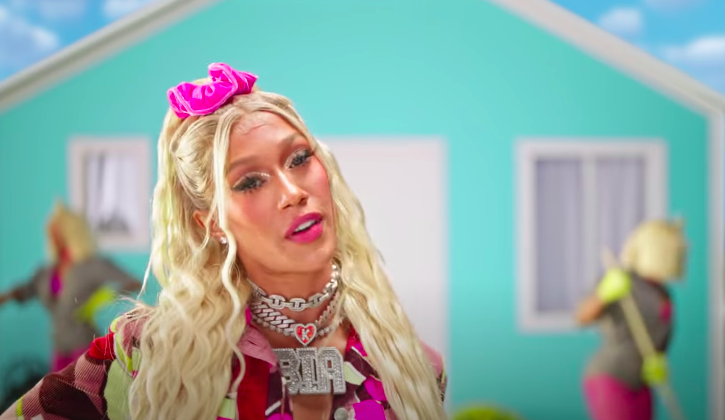 Are we getting old when songs from when we were in high school start getting sampled or have the timeframes before someone samples a record gotten shorter? Either way, when I heard someone was sampling Kelis’ ‘Milkshake’ I was intruiged… but did Bia do it justice?

Bia is definitely having a bit of a break out moment this year, coming off her viral hit “Whole Lotta Money” and then stretching it out even further with a remix. Last week, she dropped the deluxe edition of her project FOR CERTAIN, and on Tuesday, she released the music video for “Can’t Touch This.”

It seems that many women in rap are on a sampling spree right now, from City Girls to Saweetie to Latto to BIA. Coming through with the video for her new single “Can’t Touch This,” which samples Kelis’ 2003 monster hit “Milkshake.” Now, I won’t front, when I first heard this was happening I knew it could either go really right or really wrong, but this is one of those songs that is so notable that you don’t touch it unless you do it right. Produced by DJ Pharoah, IROCC, and London Jae, again the single samples Kelis’ “Milkshake” but borrows lyrical inspiration from MC Hammer’s signature hit of the same name. The result is a confident, surprisingly smooth club anthem which still stays true to the laid back style Bia has continued to present in her music (and performances) so far.

Naturally, the video also borrows some visual cues from its inspiration, giving the diner concept of Kelis’ video for “Milkshake” a modern-day update. Instead of a fast-casual eatery bringing all the boys to the yard, BIA brings the yard to the boys via her BIA Shakes food truck. She also shoots scenes in a laundromat and on a pastel dollhouse’slawn, surrounded by colorfully dressed dancers the whole way through. Bia doesn’t really give much energy throughout but I’m starting to learn that just may be her vibe that she goes for.

Quotable Lyrics:
No stylist, I don’t do repeats
I got money, bitch, I’m knee-deep
All hunnids, drippin’ in CC
Might pop that pussy like FreakNik
No mileage, boy, you can’t touch this
No bodies, boy, you ain’t fuck shit
I’m on islands, whippin’ them Porsches
Run shit, and your n***a endorse it

I can’t say I’m mad at this one, overall it’s catchy… but I also can’t say it’s one I’ll naturally hit replay on unless it just happens to come on. It can go in the playlist, though. Take a look at the video for “Can’t Touch This” below and let us know what you think. ISSA BOP OR ISSA FLOP?