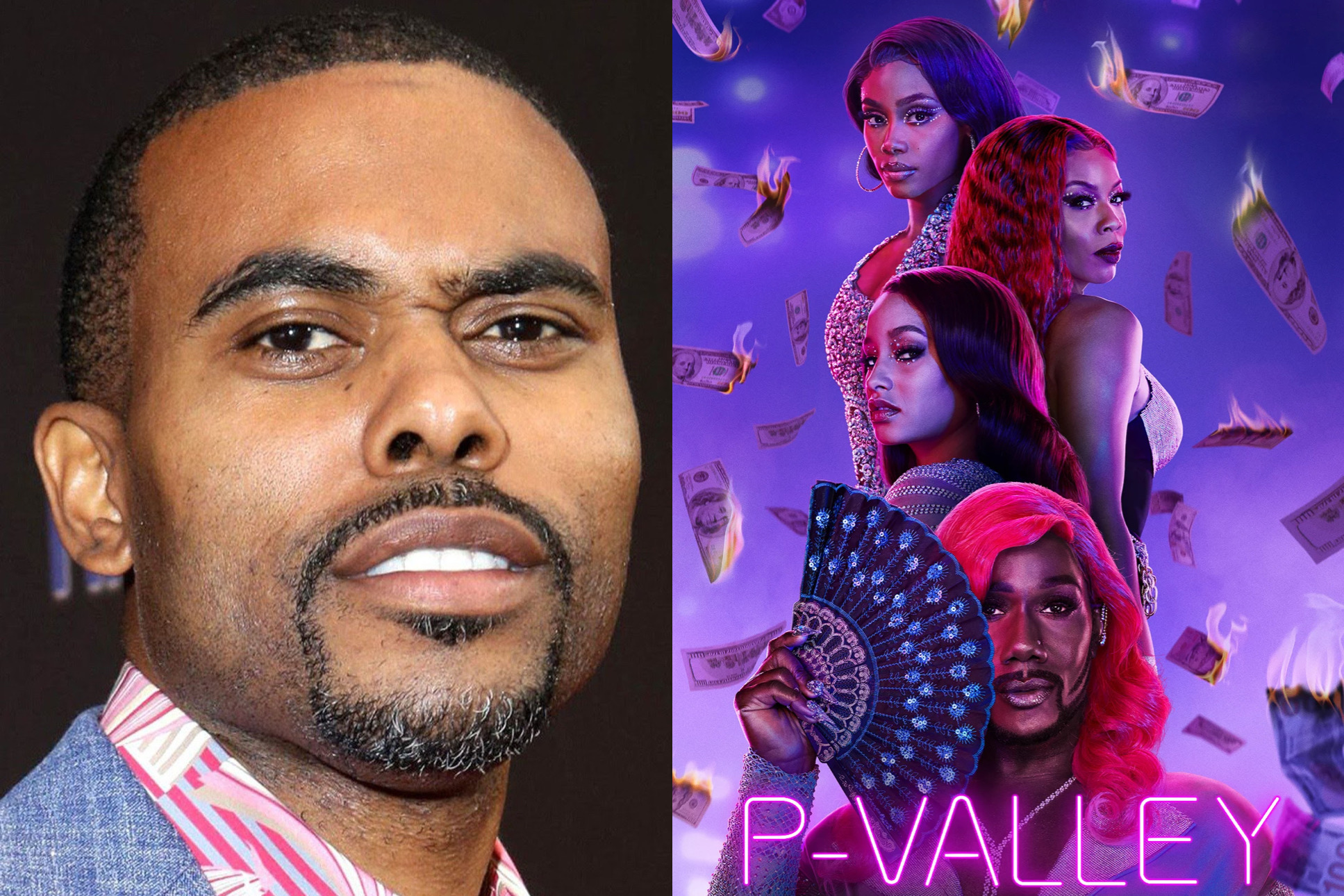 The double standards that homophobes manage to have (still in 2022) never ceases to amaze me. Fragile masculinity is something else.

There are plenty of shows that exist on various networks to entertain just about anybody, but still people choose to indulge in those they claim they aren’t “comfortable” with. Lil Duval took a moment to highlight why he has an issue with P-Valley. The hit STARZ series is centered around a Mississippi strip club and from its inception, it was a fan favorite. However, Duval hit a snag when he saw a scene that rubbed him the wrong way, so he took to Twitter to express his thoughts.

“Yea p valley lost me. They need a super gay advisory on movies like they got for everything else. Cuz That’s a lot to see if u not use to it,” he tweeted.

The responses were quick and like many of his other tweets, his message soon went viral. “I can watch gay people all day but i don’t wanna see them f*ck. And that’s not homophonic cuz i feel the same way about my momma. I can watch my momma but i don’t wanna see her F*CK!!!! Do y’all get it?” Duval also added that there are plenty of her heterosexual scenes that he isn’t a fan of, as well.

“And no the lesbian ain’t bother me cuz I’m use to it. That what y’all missing. It’s about what you’re USE TO! you’re always gon be shocked at something you’re not use to. That’s human nature. U can’t just throw something on somebody and be offended cuz they shocked.”

The writer of the episode, Patrick-Ian Polk, caught wind of the comedian’s complaints and issued a response.

“I encourage you to step away from Chucalissa. This show is not for you. Go watch something else. Cuz the gay ain’t goin’ nowhere.” Check it out below along with a few other reactions and let us know what you think. I won’t pretend like Duval is alone, because I’ve seen quite a few people slide down my timelines with this logic. Why are people so okay with lesbian scenes but “uncomfortable” when a male gay scene comes right behind it? What’s the difference? 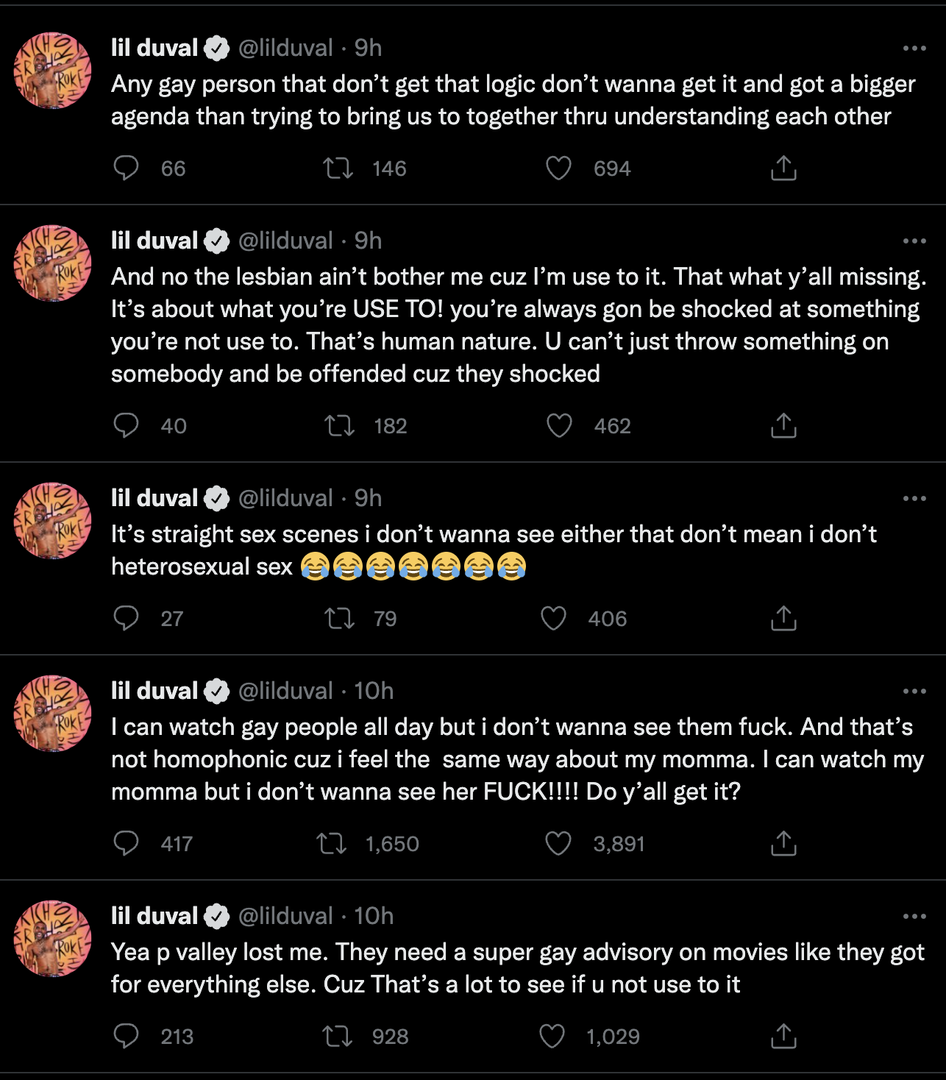 As a writer and producer of P Valley, specifically a writer of this episode, I encourage you to step away from Chucalissa. This show is not for you. Go watch something else. Cuz the gay ain’t goin’ nowhere. #pvalley https://t.co/1Wwx1kHEdA

I’m kidding, of course. In all seriousness, if you find the show too uncomfortable to watch, you’re welcome to change the channel and watch something else. But why feel the need to come online and spew your homophobic nonsense? We don’t care! #PValley https://t.co/MwU7vGhpT0

The reality is: a lot of these “straight”men are triggered by these gay love scenes. Watching them brings up questions they have about their own sexuality. That ain’t got nothing to do with us or #PValley. Do the work; look inward!

You are watching a show about a very gay man who owns and operates a strip club .

If you are a hetero Black man that is pressed by gay sex. You are just a bigot. This is about the fact that Black men do not want to unlearn their bigotry. They are making the active choice not to deprogram themselves from the ku klux clownery indoctrinated into them. Lil duval.

a fake gay sex scene being on yo mind 48 hours later kinda crazy. before noon

Imagine the writers of P Valley being like, “Daaaang…We lost Lil’ Duval…Might as well wrap it up…What we gon do now y’all? He like…GONE gone..” https://t.co/Z9SSHuZWrB pic.twitter.com/UbZyRqm4Ph

I did not have dragging Lil Duval on my bingo card today over #PValley but here I am … over it and determined. https://t.co/mX6yhW8gGy