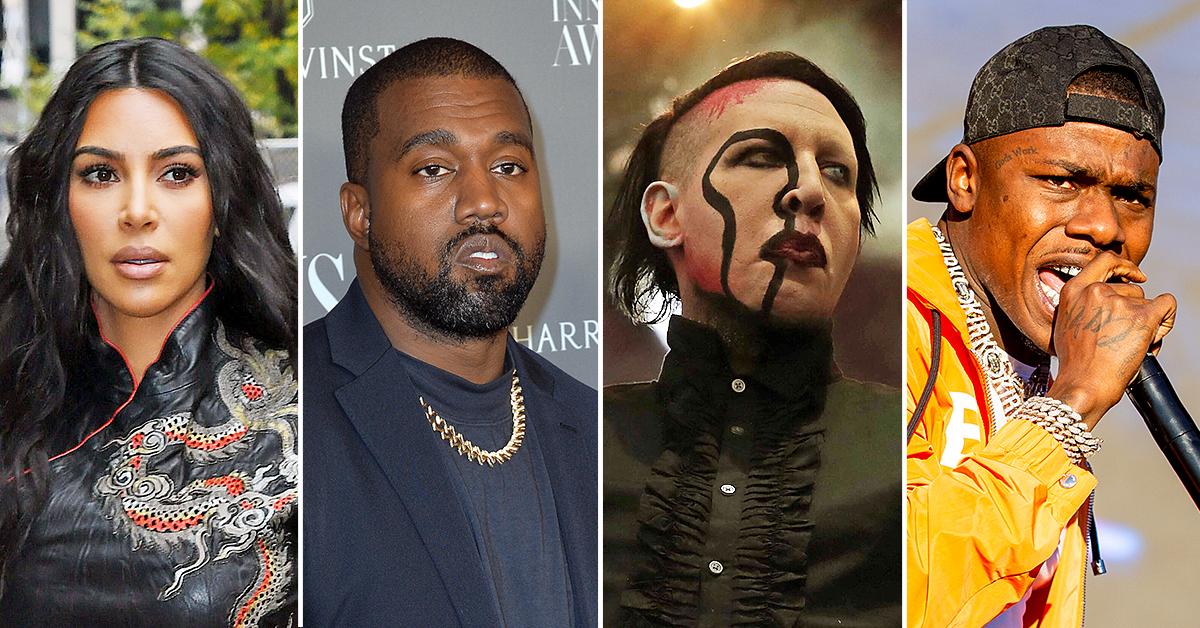 Chile, Kim and Kanye are supposed to be attempting to salvage their relationship and Kanye is out here f*cking up already. Kim was reportedly caught off guard by DaBaby and Marilyn Manson’s involvement in Kanye West’s third listening party for “DONDA” ahead of it’s release.

Ye hosted his third listening party for DONDA on Thursday which he made sure would rattle the Internet. The rapper brought out DaBaby, who has been engulfed in controversy this month over homophobic remarks made at Rolling Loud, and Marilyn Manson, the shock-rocker who is facing multiple lawsuits related to sexual abuse. Needless to say, people weren’t pleased about the people ‘Ye chose to align himself with.

At the end of the performance, Kim Kardashian emerged in a Balenciaga wedding dress before ‘Ye removed his mask, smiled, and exited the field hand-in-hand with the mother of his four children. However, it seems that she was only aware of her role in the evening. According to the folks at People Mag, Kim “missed” the appearances of DaBaby and Marilyn Manson as she was seated in a suite that faced the back of Kanye’s childhood home. The source said that Kim wasn’t in the loop about ‘Ye’s decision to bring out Marilyn Manson.

“She was seated inside a suite facing the back of the house on the stage so she would not have been able to see them at all from her vantage point,” the source said. “She wasn’t in the loop at all about what was happening at the show. She was only aware of what Kanye had asked her to do, and she was willing to help him.” Kim Kardashian and Kanye West have reportedly been working on their marriage behind the scenes in an attempt to make it work. Naturally, Kim has been supportive of ‘Ye’s endeavors, regardless of what it is. However, there’s a limitation to what she’s willing to support when it comes to ‘Ye’s ever-changing plans.

“Kanye will always be family to Kim. When Kanye is doing well and is happy, it benefits the kids,” another source said. “Kim is the first one to support his visions. He asked her to be part of the listening event and she said yes without hesitation. She didn’t know that Marilyn Manson would be there too. She understands why there is backlash. Kim is all about positive publicity. She would have never participated if she knew Manson would be there.”

Ultimately, another source said that Kim’s only intention was to support Kanye West and was caught by “surprise” after hearing about Manson and DaBaby stand alongside him.

“A lot of it took her by surprise,” a source said. “But then you have to decide: Do you bail at the last minute, or do you do what you agreed to do? In the end, she decided to stay and fulfill her promise. That doesn’t mean that she supports Marilyn Mansion or DaBaby and the things they believe. She was there to support the father of her children.”

Chile, Kris Jenner is not about to let y’all tie Kim in with being ok with Marilyn or DaBaby. What do you think of this?