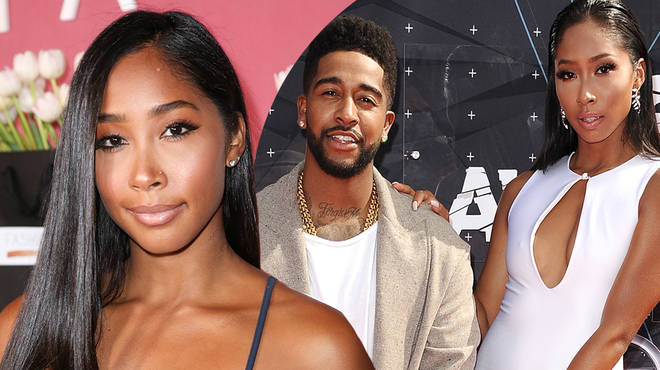 Now that the entire world is side eying her for bump-bump-bump’ing her way through the members of B2k, Jones is doing her best to downplay her relationship with Omarion in attempt to have her hoe-ness deleted.

Moniece Slaughter may be backing away from speaking about Dr. Dre and his rumored relationship with Apryl Jones, but Omarion’s ex is spilling all about the father of her children. VH1 Family Reunion: Love & Hip Hop Edition is underway as stars from all of the series’ franchises come together for a new season of the show. They’ve been hashing out their differences in order to form a more united, familial front, and Apryl is seen reuniting with Fizz after not speaking to him for approximately eight months.

Jones recently caught up with the folks over at Madame Noire and discussed her most recent VH1 appearance, revealing that she never set her sights on being a reality star. In fact, she claimed that the only reason she agreed to appear on the show with Omarion was because there were rumors floating about regarding his sexuality.

“That whole situation with me and O on Love and Hip Hop was completely controlled. I never even wanted to do freakin’ reality TV,” she said. “His management thought it would be good for him to show who he was and his life because there were gay rumors. So to show he was in a relationship with a woman and having kids and all that, they thought it would be great. If you love somebody you’re going to do it, but it just felt very controlled. I wasn’t really myself. On top of that, I was pregnant both times so I was really not myself. And when I came out of that relationship, which was fully f*cking controlled and it was a lot going on, I was like ‘Oh my God.’ I totally lost myself in that.”

Apryl also discussed what led to the end of her relationship with Fizz, Omarion’s B2K groupmate. “I believe you have to come into a relationship being completely whole. And I feel like that’s just not who he was, so for me, it just ran its course,” said Jones. “When you’re dealing with a person who doesn’t quite know themselves fully, for me, I can’t deal with that type of stuff; like insecurities and all of that. So it just really ran its course. And I just think there was a lot of pressure for us in general because of the circumstances of me being with O and people thinking [Fizz] was the bad guy when that wasn’t the case.”

Things may have fizzled, no pun intended, but Apryl defended their romance, mentioning that her relationship with Omarion had been over for nearly six years. “When me and Dreux got together, that wasn’t until three and a half years later and they weren’t friends. No one knows that, which doesn’t matter, but I think it was a lot of pressure on our relationship,” she added. “I think that also played a part in it, too, which made him feel like he was putting me in a situation and you know, all of that pressure. It was just better to end it and be amicable and walk away from it because it wasn’t going to work.”