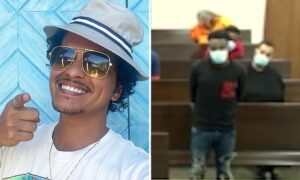 Today in shit we couldn’t even make up, a 63-year-old woman loses $100,000 after falling in love with a man who pretended to be Bruno Mars. Don’t believe me just…read.

So it’s pretty safe to assume the pandemic has left a sense of loneliness for some, right? Many are left without seeing family members or friends out of fear of catching and spreading COVID-19. However, it seems that this loneliness has created a bigger headache than one would’ve ever expected after one woman was finessed out of $100K from a man who pretended to be Bruno Mars.

Houston resident Chinwendu Azuonwu is accused of pretending to be Bruno Mars to catfish a 63-year-old woman into a relationship that would ultimately cost her 6-figures. Azuonwu was charged with third-degree felony money laundering but was only taken into custody this week. He appeared in court overnight.

The woman told police that she opened an Instagram account in pursuit of romance when the account pretending to be Mars sent her a direct message. From there, the fake Bruno Mars’s account convinced her that he wanted a sincere relationship. The woman told police that she eventually fell in love with the account under the impression that it was the real singer. In the documents, she said that he sent her pictures of Bruno Mars and text messages while he was on the road.

The woman said that the account pretending to be Bruno told her that he wanted to quit the tour to be with her but not before requesting some money. Investigators said that he asked her to write a check of $10,000 to a “friend of the band” for “tour expenses.” Two days later, she pulled out another $90K at his request.

The money was placed in two separate accounts. One belonging to Azuonwu, another to an accused accomplice named Basil Amadi. Both were interviewed. Amadi told investigators he knew Azuonwu but Chinwendu claimed he had no idea who Amadi was or why there was a $90K withdrawal.

Azuonwu’s bail was set at $30K. Is there a celebrity crush on this earth you’d be so desperate to meet that this could happen?