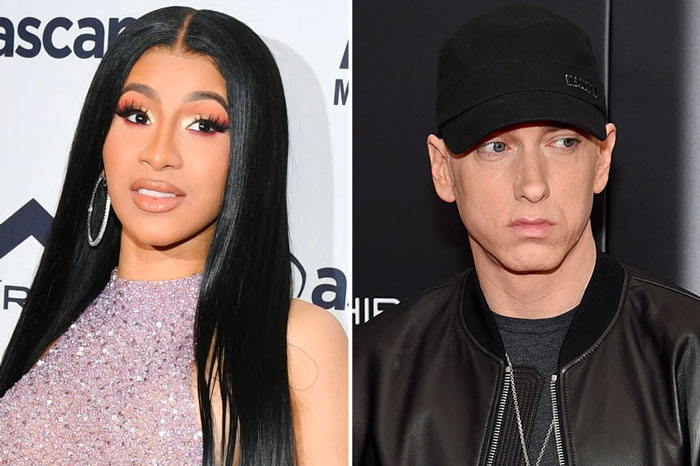 Bardi hits the haters with a swift karate chop after yet another attempt at starting rumors online.

The desperate and delusional were at it again, but Cardi B isn’t letting it go down on her watch. Cardi once rapped alongside her husband Offset that “they do anything for clout,” and that definitely rings true as her star continues to grow over the years. It seems every other day there’s a rumor being started about Cardi in a negative light (usually started around her second fan base that seems to be holding onto a beef from three years ago), which she’s often times forced to shut down with the way word quickly travels due to how hot her name is as one of the biggest music stars in entertainment right now.

Well, Bardi let it be known that we’ll be seeing some pretty high profile collaborations on her upcoming sophomore studio album, after a rumor began to start courtesy of a fake article suggesting that rapper Eminem had turned down her request for a feature. The false story claimed to be an “insider report” going around social media claiming that, among the people slated to appear on Cardi B’s next studio album, Eminem was hand-picked by the rapper but declined the feature request and even went as far as claiming the decline was due to “Cardi doesn’t care about the culture or her craft.” However, Cardi quickly revealed the reports to be fake, meaning that a collaboration could still be on the table.

Replying directly to the relatively unkown page claiming that it had “tea,” the Grammy winning rapper said, “BIG LIES….I get off the internet and ya makin sh*t up. I haven’t sent no songs to no artist yet. Love his work and much respect. This don’t even make sense.”

It should be noted that it really doesn’t make sense. In what universe would anyone really believe that someone from Cardi’s camp would not only leak behind the scenes information about a possible feature on the album that the public doesn’t know anything else about, but also disclose the fact that it was turned down and why as if that would be something in their best interest to share? It’s very telling how bad people want to see negative news involving her for clicks just based on the level of thought that obviously doesn’t go into it.

Since they like to make up LIES about me cause their so obsessed just know this .. y’all laughing about this fake rumor but wait until y’all see these next collabs 😉”

“Since they like to make up LIES about me cause their so obsessed just know this .. y’all laughing about this fake rumor but wait until y’all see these next collabs Winking face” Cardi later tweeted, hinting at some major collabs that are actually in the works for the album. Whew chile, whatever happened to just enjoying an artist or not? If you don’t like the girl, go listen to someone you do in peace. What is all the fake news for? Thoughts?