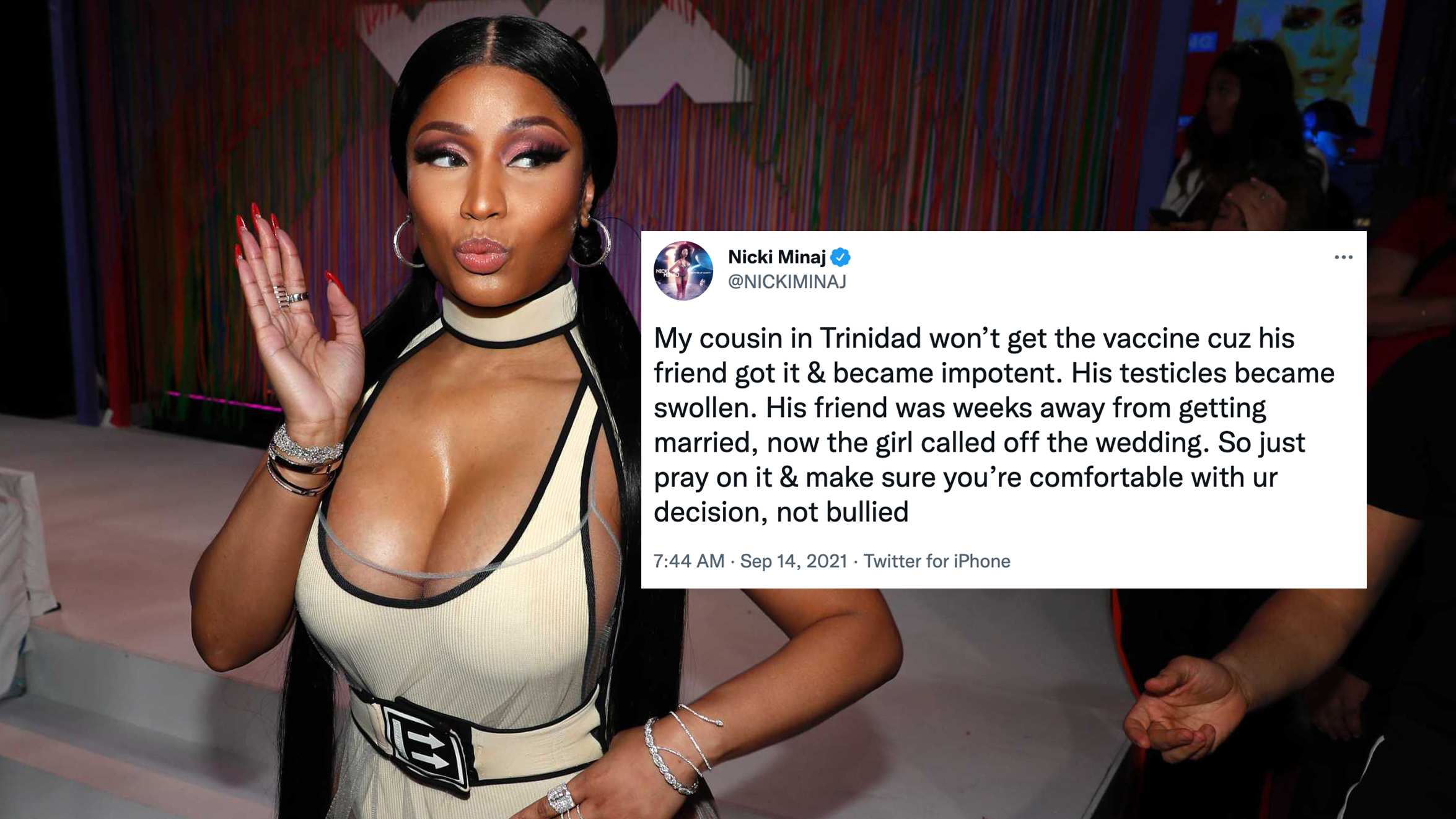 Nicki Minaj’s twitter has become just as much of a circus as her personal life. Remember that weird ass story that nobody asked for the other day when Minaj claimed someone’s testicles imploded after the vaccine? Well, the Health Minister of Trinidad & Tobago has confirmed… that was a bed of lies. But baby, that ain’t even where it stops.

Nicki Minaj shared what’s been called some dangerous misinformation on social media this week pertaining to the COVID-19 vaccine, claiming that one of her cousin’s friends experienced a pair of swollen testicles after getting the jab, which contributed to her decision to not get vaccinated. Nicki recently revealed her vaccination status after telling fans that she contracted the virus at a video shoot, revealing that she was not vaxxed. But it was her claims about her cousin’s friend that took over the internet and had everyone looking at her sideways.

“My cousin in Trinidad won’t get the vaccine cuz his friend got it & became impotent. His testicles became swollen,” she said. “His friend was weeks away from getting married, now the girl called off the wedding. So just pray on it & make sure you’re comfortable with ur decision, not bullied.”

Many responded to Minaj informing her that her “cousin’s friend” may have had what sounds like an STD rather than a vaccine side effect. The backlash was so strong that it reached mainstream national news. Even Dr. Anthony Fauci commented on her bizarre claims, denying that men and women could experience reproduction issues upon getting the vaccine.

After getting some research done on the matter, Trinidad & Tobago’s health minister Terrence Deyalsingh has responded to Nicki Minaj, denying that there are any reported cases of “swollen testicles” because of the vaccine. She also claimed that she was “invited to the White House” for her stance, which Don Lemon later clarified that they only “offered a call with with one of their doctors” for educational purposes as they would do anyone else. Minaj also claimed she was in Twitter jail, but Twitter representatives have responded that that is a lie.

Here’s the thing, no one is wrong for their decisions on what they decide to do with their body in terms of the vaccine. However it is important for us be careful with the information we spread especially when we aren’t properly educated. With a cult following like Minaj’s her fans will actually make the decision not to get vaxxed simply because she said so. Case in point, apparently these fools were protesting outside of the CDC today based on Nicki’s claims. Deflection at it’s finest folks. Thoughts?

A White House official tells @cnn’s Jeff Zeleny that “As we have with others, we offered a call with Nicki Minaj and one of our doctors to answer questions she has about the safety and effectiveness of the vaccine.” https://t.co/C3eN1jK2Wa

fyi: A Twitter spokesperson tells me they "did not take any enforcement action" on Nicki Minaj's account

The government of Trinidad and Tobago says she’s lying about her cousin having having gotten swollen balls from the COVID vaccine.

She’s having a real banner day.