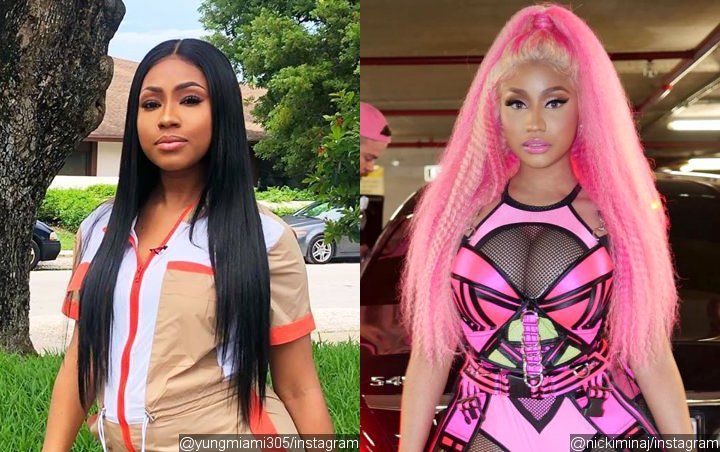 Stan culture is so damn toxic, one really has to wonder how these people never get tired.

It’s never a dull moment on Twitter, especially when it involves female rappers and overly involved “Stans.” Yung Miami and JT have continued defining their lane as artists pop culture and hip-hop in the past year as they continue to ride the success of “City On Lock.” Many of rap’s leading ladies have offered them praise and support with the exception of one — Nicki Minaj.

Apparently, Nicki Minaj blocked Yung Miami quite some time ago which the City Girl rapper hopes to be reversed. “Can you unblock me on Instagram @NICKIMINAJ?” Miami wrote on Twitter before following it up with a shrug emoji. “I’m not obsessed, desperate, none of that fr I just asked her to unblock me I ain’t do shit! Tf,” she added in another tweet after of course, Nicki Minaj’s online safety patrol known as the “Barbz” immediately put on their vests and attacked her.

I’m not obsessed, desperate, none of that fr I just asked her to unblock me I ain’t do shit! Tf

As fans began debating in the replies, per usual someone had to bring up Cardi B and suggested Yung Miami’s allegiance to Cardi B at the height of the Cardi vs. Nicki beef may have ruffled the “Chun-Li” rappers feathers. Charlamagne asked Miami whether she’d ever work with Nicki, despite her relationship with Cardi. “I just want to stay away from that question, like, I don’t want to get into that but I am team Cardi. City Girls is Team Cardi,” she said in the interview.

What I hate about this “Stan” and petty culture, is people really take this mindset seriously where if someone works with one artist who doesn’t like another, that they’re automatically now against the opposite artist. Also, the obsessive fans will harass anyone who they feel isn’t showing love to their fave but then when they do they’re mad about that as well. It’s just toxic. I will admit, once I block someone you’re out of here for life so I don’t know if Minaj will unblock Caresha nor do I care (and neither should she tbh), but was it really serious enough for all this commotion?

Check some of the responses below.

and nicki… you think cause she fw Santana you have a chance💀 no pic.twitter.com/5Xd4mAsG6q

Caresha never said anything bad about Nicki though so I’m confused on how she looks desperate asking to be unblocked.