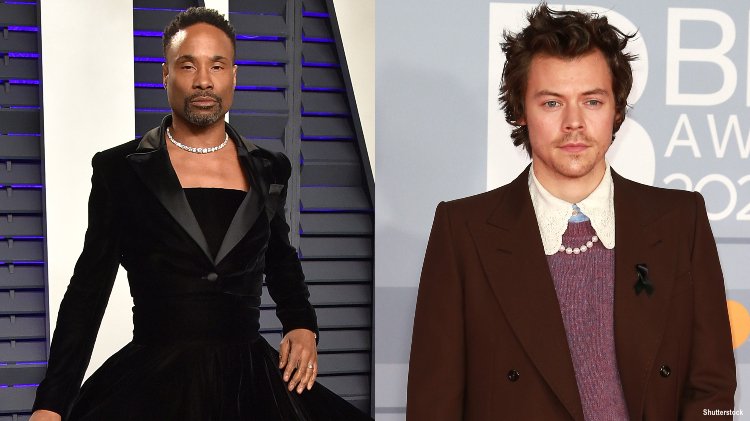 I don’t mean no harm, but Billy might’ve been inhaling a little too much of that Cinderlla fairy dust if he thinks he or Harry are the first man to ever wear a dress.

Billy Porter has called out American Vogue for choosing to feature Harry Styles as its first male to wear a dress on it’s front cover for the December 2019 issue. The 52-year-old Pose icon told The Sunday Times that he is in no way “dragging” the 27-year-old, but simply feels the One Direction singer hasn’t put in the work when it comes to rallying against gender expectations the same way he has. “I. Personally. Changed. The. Whole. Game. And that is not ego, that is just fact,” he said to the British newspaper.

“I feel like the fashion industry has accepted me because they have to. I’m not necessarily convinced and here is why. “I was the first one doing it and now everybody is doing it. I created the conversation and yet Vogue still put Harry Styles, a straight white man, in a dress on their cover for the first time.”

“I’m not dragging Harry Styles,” Porter added, “but he is the one you’re going to try and use to represent this new conversation? He doesn’t care, he’s just doing it because it’s the thing to do. This is politics for me. This is my life. I had to fight my entire life to get to the place where I would wear a dress to the Oscars and not be gunned down. All he has to do is be white and straight.”

Styles has never publicly labelled his sexuality but has long been a tireless LGBT+ advocate. He told Vogue for his cover spread that he has never felt “limited” to men’s clothing. “I’ll put on something that feels really flamboyant, and I don’t feel crazy wearing it,” he said at the time. “I think if you get something that you feel amazing in, it’s like a superhero outfit. Clothes are there to have fun with and experiment with and play with.”

I have mixed feelings on this and here’s why. I get what Billy is saying wholeheartedly that a lot of times struggles and expression that the LGBTQ community has had to fight for are often times pandered to and taken from us by more mainstream faces who may or may not even identify with our community. However, saying that he’s the first to do it is a bit of a stretch. While Billy has been and continues to be an amazing advocate for our community and owning who you are unapologetically…that part is a stretch and I’ll just leave it at that. Thoughts?

Oh also, David Bowie had a gun pulled on him in 1971 for wearing a dress for most of his US press tour for “The Man Who Sold The World” https://t.co/CH1WBXvYtT

maybe billy porter should know that the vogue cover wasn’t about the dress. it was about harry on the cover (who’d be the first man to do so) and he CHOSE to wear a dress

Billy Porter wasn't the first man to wear a dress though….. pic.twitter.com/5dr3HUfV7s

Harry Styles in a dress minding his business:

Not to devote more mental energy to Billy Porter, but it's hilarious that he thinks it's brave for a Broadway actor to wear a dress when Dennis Rodman did it in the NBA in the 90s. Basically the most aggressively masculine setting + back when society was way more homophobic pic.twitter.com/QABTAQFJ5k

Billy Porter really needs to humble himself. Before him Dennis Rodman wore dresses even Jaden Smith and YoungThug wore a damn dress before him . This wasn’t ground breaking it was nice but nothing new

Billy Porter when he gets nominated for an Emmy and none of his trans co-stars don't: Patience, babes, this is important recognition and I deserve this

Dear Harry Styles and Billy Porter arguing over who wore a dress first..

So GROSS. I’m so disappointed Billy Porter said this. Does the life of Little Richard not exist? Prince? RuPaul? Laverne Cox? It’s all about Billy? This conversation just got really boring pic.twitter.com/JcaVk1ze6p