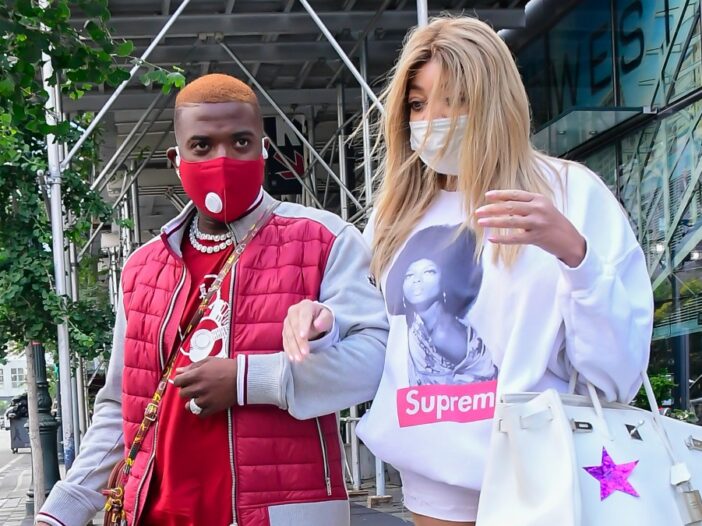 I don’t really care what the status of their link up was, I just know of Wendy’s troubled past with substance abuse and that Ray J was allegedly the last person to see Whitney Houston alive after supposedly being her “pusher”.. So um, I just don’t think he and Wendy need to hang out, that’s all.

A link up between Wendy Williams and Ray J that showed the two holding hands led social media to actually speculate if the two were an item. On Saturday, the talk show host posted a picture of her and Brandy’s brother on Instagram with the caption, “Guess who’s treating me to brunch? He’s very cute & very married. I’m close to his family & he is my little brother.” Following this, on Sunday, the pair were seen hand-in-hand while out and about in the Big Apple.

Although the internet has posited a romance between Wendy Williams and Ray J, Williams’ IG post, which states they are just friends, clearly debunks the would-be rumor. Nonetheless, Williams is very much single after a tumultuous divorce from her ex-husband, Kevin Hunter. Ray J, however, is still married to his Love and Hip Hop:Hollywood co-star, Princess Love. Although the “One Wish” singer told Williams during his last appearance on her show that he and Love were getting a divorce, it’s reported that the two have since worked things out..yes, again.

Fellow celebrities and social media users shared their thoughts about the Wendy Williams and Ray J link up, with many comically referring to both of their dating histories. Lil’ Duval made a series of tweets in relation to the supposed-couple. One of his tweets saying, “I wonder who gon end up with Wendy Williams cuz she trying hard to catch a man and of you n*ggaz gon take her bait.”

Take a look at the photos and some of the reactions below and let us know what you think. Do you think Wendy Williams and Ray J would make a good couple? What do you think of their friendship? Get Ray J away from Wendy. Period.

Ray J might be the wildest boy to ever live https://t.co/Y9rOvRhleb

• is Brandy’s brother
• dated Whitney Houston, Lil Kim & Pamela Anderson
• made Kim Kardashian famous
• is a member of the Bloods
• made ‘One Wish’ & ‘Wait A Minute’
• made Scoot-E-Bike a 7 figure company
• owns Suge Knight’s life rights

Ray J is a legend.

Ray J will make us keep up with his life against our will https://t.co/gE6Wkr3GRa

Hear me out: I respect the hustle. pic.twitter.com/5JllFEe0A1

Didn't think any couple could be more mismatched than Flava Flave and Brigitte Nielsen, but then I'm hearing abt Ray J and Wendy Williams. Strange days, indeed. pic.twitter.com/KcaS5SRnHW