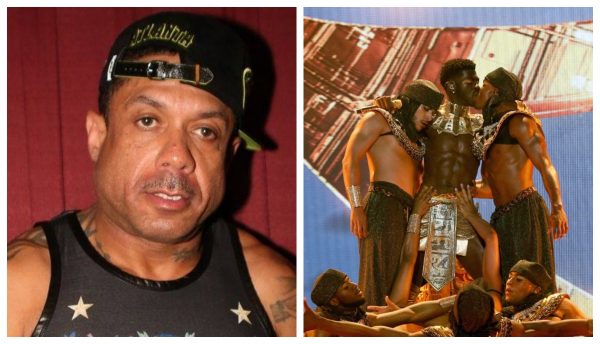 Benzino decided to stick his chin out since his neck is non-existent and criticize both BET and Lil Nas X over Sunday night’s BET Awards performance. He questioned how parents would “explain sh*t like this to your kid?” although he was recently called out for not being there for his in the first place to have to worry about that.

His daughter Coi Leray may have been nominated for her first BET award this year, but Benzino still wasn’t impressed by what the network had to offer. There were many unforgettable moments during the ceremony including the Ruff Ryders honoring DMX, the ladies of Rap honoring Queen Latifah with a Lifetime Achievement Award, and who can forget that quick, yet controversial kiss Lil Nas X had at the end of his performance.

Thousands of people took to social media to complain about Lil Nas X, including Benzino who called for the Source Awards to make a return. “That sh*t BET pulled yesterday was lame asf,” he wrote in a text image.

It was too uncomfortable, too irresponsible, too forced and too irrelevant to the awards,” he continued. “Homie ain’t even hot like that for music anymore anyway. It’s a shame what all this is comming too. I wish I has the backing to bring the Source Awards back.” He wasn’t quite finished and continued his thoughts in the caption.

“I bought ol town road for ZINO, he knows every word but all the satanic sh*t I’m just not with,” Benzino added. He questioned how parents were supposed to explain Lil Nas X’s performance to their children while insisting he has “respect and love for the gay community.” He added, “I could see if he was pooping but it was unexpected and unnecessary. I didn’t care for the Madonna kiss either. I could see if they way dating.”

“Now I hope I don’t offend anyone because this post wasn’t meant for that.”

He later deleted the post and came back with another claiming he isn’t homophobic and didn’t mean to offend, Lil Nas X apparently caught wind of the topic and responded briefly. In usual fashion, he brushed off the criticism with a bit of humor, asking his Twitter followers, “Why y’all get made at me so easily. All I’ve done was be a bad bitch.”

Later on, he quoted a tweet from a blog story on the subject where he laughed at Benzino’s suggesting that parents will have to sit their kids down and explain sexuality. Take a look at all of the receipts below and let us know what you think. Are people overreacting to this whole Nas thing?

why y’all get mad at me so easily. all i’ve ever done was be a bad bitch.

i’m sorry but the thought of niggas sitting their kids down in the living room and telling them gay people exist is so hilarious to me https://t.co/8ESprtirAy