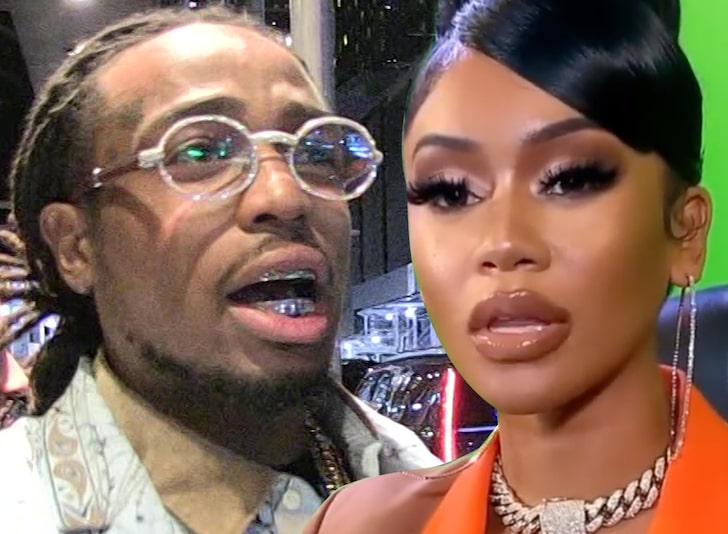 Just when some of the chatter around their highly publicized breakup has started to die down, Quavo is about to get the people talking again with a new record where he raps, “She slimy, she sneaky, I’m taking back that Bentley.”

Around Christmas time, Quavo generously gifted Saweetie, his girlfriend at the time, a fully customized new Bentley. The luxurious new whip came equipped in an icy blue wrap, perfect to complete Saweetie’s look. Back then, it was impossible to predict that the car would end up becoming one of the central components to their messy breakup but, alas, here we are.

There were rumors flying around that Quavo had sent a repo man to take back the Bentley in the days following their shocking split. Reps for the rapper soon after claimed that the rumors were false. However, we received word shortly after that the pair had actually already broken up prior to it being public knowledge, but it was the Bently being taken that prompted a pissed Saweetie to take things public with her tweets revealing their breakup. So the public was no longer sure what to believe other than the fact these two are no caput, but in a new song preview, Quavo appears to be fanning the flames by stating that he actually did take back the car…or is at least thinking about it.

Quavo seems to diss his ex-girlfriend Saweetie when he says, “Lil’ bitty b*tch, she slimy, she sneaky/I’m takin’ back that Bentley.” It’s unclear when this track was first previewed but it was shared alongside the following alleged caption: “Skrtttt Skrtt takin back dat Bently!! F*ck dem hoes now I gotta act stingy [laughing emoji] new Huncho & Petro otw.”

Clearly, Quavo is still feeling pretty petty about his breakup, as most Aries men would. This isn’t the first time he has seemingly dissed Saweetie in a song snippet. At the end of last month, he shared another snippet where he says, “Young n***a burnt out, burnt out/12 pulling up so we burned out/Sweet little b*tch now she turnt out.” Many believed that to also be some shade at Saweetie.

Take a listen to the clip below and let us know what you think of this mess? Is it petty to take back gifts after a breakup or is all fair in love and war?