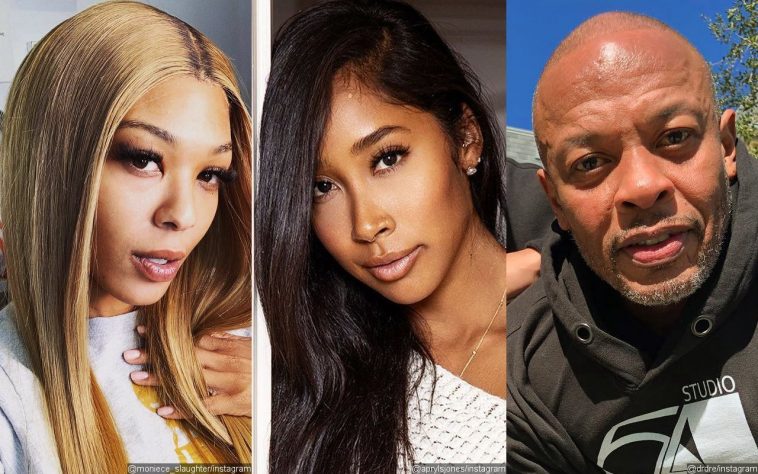 Did Dre sick the goons on Moniece? Well, love or hate her, you have to admit Moniece hasn’t been caught in a lie yet when it comes to the tea she brings to the table, so this should definitely be a bit alarming.

Several days ago, Moniece Slaughter appeared to confirm the dating rumors that Dr. Dre and Apryl Jones have been entrapped in, claiming that they’ve been together “for a while”. Something may have happened though because, in her first update on the matter since then, Moniece has started sharing some very disturbing allegations about the famed mega-producer.

In the last few years, several women have made allegations about Dr. Dre, claiming that he has been abusive to them. Moniece Slaughter says that she never wanted to believe the rumors but that, after having a few conversations over the weekend, she is certain that Dr. Dre is a “woman beater”.

“You know what, I did not want to believe that [Dr.] Dre was a woman beater but after the couple of phone calls that I literally just had, he’s a woman beater,” emphatically said Moniece on Instagram Live. “For sure.”

Moniece also took to her Instagram Live to claim Dre had a producer call her to threaten her. She said, “How dare you send a n*gga to bang my motherfcking line and threaten me? don’t know you and you don’t know me and I didn’t say anything negative about you, sir. Don’t you send another motherfucker to this phone of mine to make one more fcking threat.” She added, “Yeah, Dr. Dre. I recorded it.”

Fans have been reacting to Moniece’s claim on social media. One fan wrote, “Um mo u might wanna let this one go’ 😂 they don’t call him beats by dre for nothing.” Another believed Dre shouldn’t be concerned about Moniece but should worry about his estranged wife coming for him. They wrote, “She didn’t “Reveal” anything…. she just confirmed it 🤣 what he need to do is worry about that strong face wife that’s coming for his juggler!” Take at the receipts and let us know what you think. Based on Dre’s well documented history… I don’t really see to many flaws in what Moniece is stating.