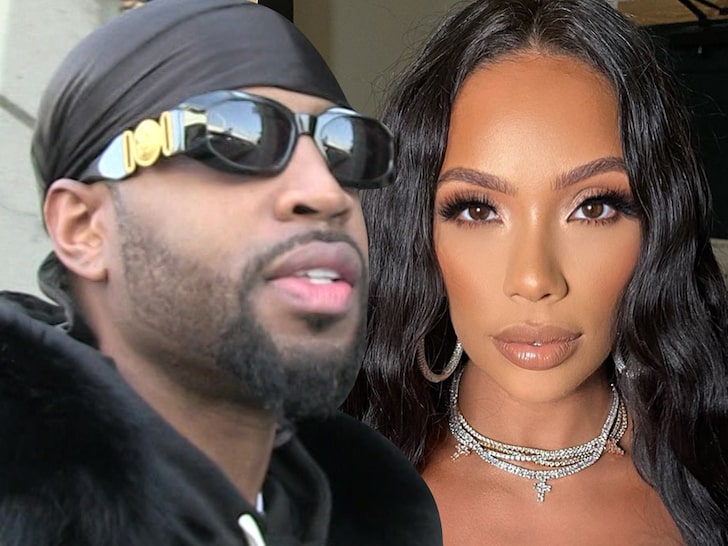 Chile, apparently Erica had a bit of a ‘Waiting to Exhale’ moment and decided to break up Safaree’s belongings right along with their marriage.

Let’s be honest, Erica Mena and Safaree have been a consistent (and exhausting) source of many dramatic headlines since they decided to join forces. After pretending to have gotten divorced last year before admitting that they were clout-chasing, Erica officially filed for divorce from Safaree Samuels a few months back after plenty of false alarms that they were calling it quits. Despite the birth of their second child just a week or so ago it seems the split is everything but peaceful as Safaree is now claiming in court that Erica has destroyed his expensive belongings such as sneakers and motorcycles while in a fit of rage..and he wants her to pay up.

According to the folks over at TMZ, Safaree filed docs asking the judge to hold Mena in contempt for violating their domestic relations standing order, which prohibits them from harassing each other or destroying each other’s property during the divorce.

Safaree says Erica did him, and his stuff, dirty back on May 23, just 2 days after she filed for divorce. He alleges she damaged $30k worth of custom sneakers by pouring bleach on them and cutting the laces. However apparently the wrath of Mena didn’t stop there as he also claims Erica destroyed 2 motorcycles and a four-wheeler motorbike by pouring paint all over the motorcycles, and directly into the exhaust pipes and gas tanks of all the vehicles. He says her goal was pretty clear — render his beloved bikes useless.

Safaree points out Erica was 8 months pregnant, with their second child, when all this alleged mayhem went down — and he claims their home security cameras recorded all of it, and he’s more than happy to turn that footage over to the court. He wants the judge to force Erica to reimburse him around $50k for the damage.

Besides the money, Safaree also mentions the possibility he’ll report her to law enforcement — he’s considering pursuing felony charges for criminal destruction. He adds, Erica’s attempting a narrative in the public that she’s overwhelmed with taking care of their newborn, but apparently “has ample time to engage in disruptive and intentional acts to vilify and disparage” him. He also claims she has changed the locks and security codes on the home they shared.

While I do think it’s unfortunate since they have brought children into this situation…At this point, when these two go their separate ways I think it’ll be a breath of fresh air for them and us, because girl… Thoughts?