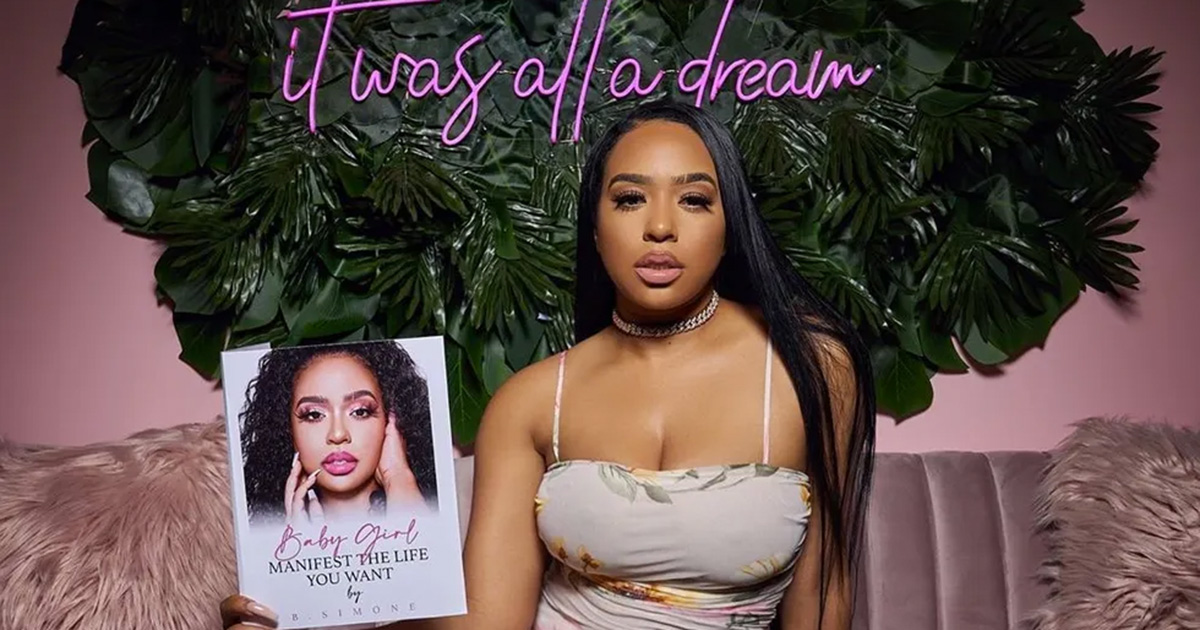 Jesus. Another day, another B. Simone dragging courtesy of social media.

It seems B. Simone can’t seem to catch a break these days. Over the last few weeks the comedian has found herself being criticized online for one reason or another. This time, it’s because people have discovered that a number of passages from her best-selling book “Babygirl: Manifest The Life You Want” were stolen.

B. Simone became a worldwide trending topic on Twitter Saturday (Jun. 13) for the third time in recent weeks after someone pointed out that a lot of the stuff she put in her “book” was taken without credit (i.e. plagiarized) from other content creators.

“Would love for @TheBSimone to STOP taking small content creators’ hardwork and selling it as her own!!!” tweeted a woman named Ell Duclos, who founded the 41,000+ strong community of female bloggers called “BossGirlBloggers.”

She added: “Disgusting. This is not entrepreneurship. This is PLAGIARIZING.”

Her tweet was accompanied by a side-by-side screengrab of a self-help guide she wrote herself called “50 Questions to Find your Best Self” and a screenshot of a section from B. Simone’s book which is literally the exact same thing (minus 20 questions), word-for-word.

Would love for @TheBSimone to STOP taking small content creators’ hardwork and selling it as her own!!!

Disgusting. This is not entrepreneurship. This is PLAGIARIZING. pic.twitter.com/CCSQ88A85e

However, that was just the tip of the iceberg. Several other Twitter users continued to call B. Simone out for ripping off other female content creators while providing undeniable examples of her plagiarism.

She stole from me too! I have screenshots! https://t.co/lsn9IFdntJ

You guessed it. Another plagerized piece, this time from The Visionpreneur, who doesn't appear to have a twitter. pic.twitter.com/1OFJAHQIxt

Wow, just a look through her twitter and she has also plagerized an identical page from @happinessplannr too… pic.twitter.com/fXaQnTfiEE

Went on Pinterest and found this exact page… pic.twitter.com/PW8UX0gOSk

We just bought their book and found at least 3 pages so far that are exact copies of our printables…even the font. 😮😮😮 I mean, they could have at least modified them a bit, but no. pic.twitter.com/N0ir1J9azo

I know it might not appear to be much aside from a listicle but I've poured my heart and soul into my blog and writing for 10 years, and I don't appreciate being ripped off time and time again. https://t.co/BUojewX8g2

And this ain’t the first time B. Simone has found herself atop Twitter’s trending topics either.

In fact, it was just a few days ago that she was being dragged for saying that she doesn’t want to date a man who works a 9-5 because she’s an entrepreneur and he wouldn’t understand her “hustle.”

And before that, she ended up on the wrong side of cancel culture for her comments about the global protests against racial injustice and police brutality:

“I’m not living to please man. I’m here to please God at the end of the day… I am a CHRISTIAN! I’m God fearing, I have to answer to him! I’m going to ask myself WWJD not what an angry black woman do! I am angry but i am also trying to be Godly.”

Now, she’s being dragged all over again for previously bragging about being a millionaire and then coming to find out, one of the things that helped her get there (i.e. her book, which reportedly sold thousands of copies just hours after it was released) was full of stolen content.

B. Simone …. PLAGIARIZED that flimsy pre-k scrapbook she was selling for $30???????? She stayed up til 3am doing that????? pic.twitter.com/qeSUGXIJGg

b simone is in a whole mess now and someone said she'll need a 9-5 lawyer to get her out of it pic.twitter.com/4GJWmYojt0

B Simone really made y’all pay $33 for a book made out of shit she stole off Pinterest. I have to laugh.

B. Simone was anti violence/looting because she was stealing with a computer she already had.

B.Simone didn’t even shuffle the questions around. We learned that in elementary school when we copied Timmy’s homework. Imagine being up at 3am stapling and stealing.

As of now, the book was said to be taken down from new sales following this debacle. Whew, chile … three separate draggings in just under three weeks. You love to hate to love to see it. For what it’s worth, her manager has responded to the backlash stating that they hired a design firm to handle the book and had no knowledge of the swiped content. What do you guys think of all of this? Should Simone get the blame?