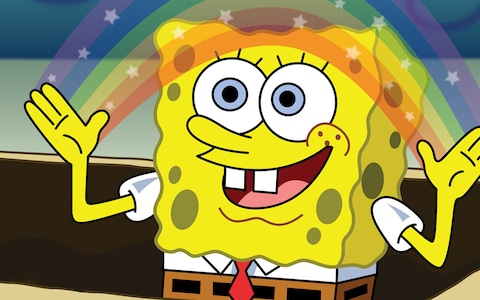 Many believe that Nickelodeon may have confirmed that the character Spongebob Squarepants is in fact gay in a tweet celebrating Pride month.

Happy Pride month to a certain yellow sponge who lives in a pineapple under the sea! On Saturday (June 13th), Nickelodeon seemed to confirm many folks’ longtime suspicions that the character of Spongebob Squarepants from the series of the same name is, in fact, gay. Although they didn’t explicitly state it, the network shared a post on Twitter celebrating Pride month, which included some photos of a few of their characters that are apart of the LGBTQ+ community. One of the photos depicted a rainbow-fied Spongebob smiling wide.

Celebrating #Pride with the LGBTQ+ community and their allies this month and every month 🌈 ⁣
(🎨: by @ramzymasri) pic.twitter.com/pENmTaQB0h

“Celebrating #Pride with the LGBTQ+ community and their allies this month and every month,” the tweet read. The post also includes images of Schwoz Schwartz from Henry Danger and Korra from the Avatar spin-off show Legend of Korra. Fans have known for ages that Korra is bisexual, as it was explicitly written into the show itself. The character of Schwoz is played by actor Michael D. Cohen, who recently revealed himself to be a transgendered man.

This of course sparked major debate via social media about the beloved character. With some even pointing out a 2005 interview where the creator of the show labeling the Sponge as Asexual, someone who is without sexual feelings or attractions. Asexual individuals may still experience attraction but this attraction doesn’t need to be realized in any sexual manner. Check out some of the excited reactions from Twitter users about Spongebob’s unofficial coming out.

Spongebob gay? I mean he literally had a baby with Patrick pic.twitter.com/RMLVUomVsL

Everyone who is "shocked" that SpongeBob is gay doesn't remember this episode pic.twitter.com/dQ08Ai39H7

because spongebob was confirmed as asexual by the creator in 2005. and asexuals are lgbtqia+.

yes, you can be gay and asexual, but also keep in mind that being lgbtqia+ doesn't just mean same gender attraction.

THIS PIC HAS ONLY GOTTEN MORE POWERFUL pic.twitter.com/tATy8k0ZXn

FYI: Spongebob isn’t gay, he’s asexual, and creator Stephen Hillenburg confirmed that before he died. Asexuals are part of the LGBTQ+ community and therefore are fully represented under the rainbow flag.

Put some respect on his asexuality.

Thank you for coming to my Ted Talk. https://t.co/Shh1rw0Fm7

Look at the way Spongebob looking at Sandy. This mf is NOT gay. pic.twitter.com/cxshXYR1E1

everyone keeps talling abt spongebob and how hes ace and shit but who the fuck is this guy ???? is he gay ????? whats his deal ??????? pic.twitter.com/vBK1GvfWpy