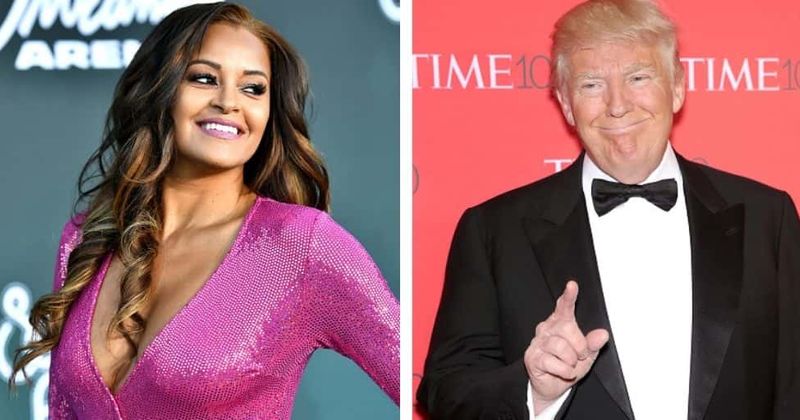 She also said that he prefers Ivanka over Melania, and everyone is aware that he cheats on his wife.

Long before she was hosting her own talk show on Fox Soul, Claudia Jordan was featured on The Apprentice with sir Orange Bottoms himself, Donald Trump. Since the overly tanned reality star has unfortunately become America’s Commander-in-Chief, people who have had run-ins with Trump have come forward with own encounters with the President. Claudia visited the Behind The Velvet Rope With David Yontef podcast recent and shared her two cents, revealing what she said were controversial remarks Trump made about Black men. She also stated that he repeatedly attempted to kiss her.

Jordan noted that in her opinion, Tiffany Trump is the most neglected “of all the daughters” and the President favors his ex-wife Ivanka over his current wife Melania Trump. She also stated that Trump judges people on what they look like and “values people based on how thin they are, how attractive they are, if they’re rich.”

Donald Trump even allegedly called Claudia Jordan and told her not to waste her time dating Black men. “I was at the time dating an Olympic athlete, Black man, and who is the best in the world,” said Jordan. “And I was like, ‘Wait, why would you say that to me?’ And he said, ‘Cause they don’t have money.’ And I was like, hmm, okay. So just throw away the whole race because they don’t have the money to you. So I told him, I said, ‘That’s not a cool thing.’”

That wasn’t all. “Oh, before I got ‘Apprentice’, we were just like the year or the year leading up to the show. He was trying it a little bit, you know, he would kind of do it … He tried to kiss me one time, twice,” she said. “And I had to remind him that he was married. That was like, you are not putting that tongue in my mouth. This is not going to happen. Absolutely not.“

Jordan did want to clarify that she didn’t believe Trump’s advances were sexual assault, and she added that Melania is well aware that her husband allegedly cheats on her. “That’s why her diamonds and bracelets are so big.”