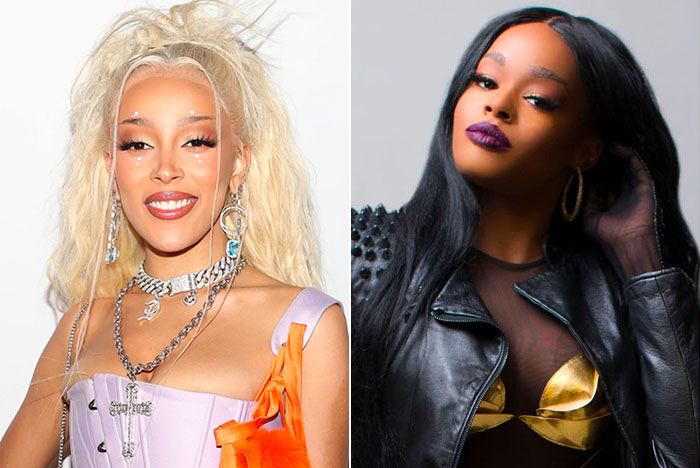 Azealia has made a pretty consistent habit of publicly dissing her would-be contemporaries who have lapped her in terms of success due to her self destructive mouth. Her victim target time… Doja Cat.

One thing about Azealia Banks, she will always make her voice heard whether we want to hear it or not. She started off the week trashing Kanye West’s Donda, and now she’s back with more views from the chicken coop and is back to targeting Doja Cat. In the past, Banks has taken her fair share of digs at the ‘Planet Her’ artist, and while it is unclear why Banks decided to erupt on Doja in the first place, Azealia made it known that she believes she’s the brighter star when it comes to her and Doja Cat.

A Twitter user seemingly called out Banks for “fatshaming” Doja Cat before dishing out compliments to the Popstar. “Just for her to finally admit now that Doja is also a bonafide star.. Hm k.” The tweet did not go unchecked by Banks, of course.

“Actually, I’m the bonafide star, wrote Banks, “Doja makes music for ten year olds and is very derivative. Cute girl, but her attempts at witty east coast Roman reloaded flows are pitiful and not in the least amusing. And yes she looked terrible before she lost weight. Cut azealia & doja are miles more culturally important than any of these weak ass white socialites.”

This probably won’t be the last time Banks has something to say about Doja, when asked for a response of her own, Doja offered well..pretty much nothing tweeting “what would you do if you lived in a gangster pair of dice?,” seemingly suggesting that Azealia lives on her nuts before deleting the tweet. Check it all out below? Do you agree with Azealia or is this another case of her hating on someone with the career she would’ve had if she’d shut her mouth for once?