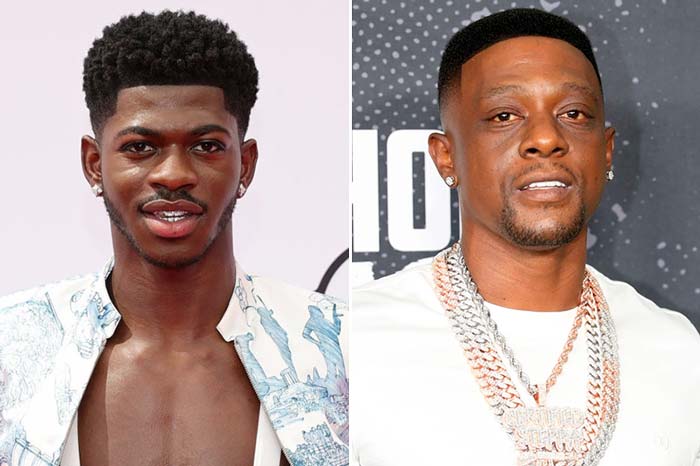 As expected, Boosie and quite a few others were quick to be “outraged” at Lil Nas’s “pregnancy” announcement. However, it looks like Nas may have had enough and issued an expert reply to Bussy Badazz, who continues to make homophobic comments about him.

Boosie Badazz seemingly gets an alert every time Lil Nas X takes a breath, because whenever the pop-rapper makes an announcement, performs, or well…exists, Boosie is always the first person to make a comment about it. And generally, he’s not very happy about the 22-year-old hitmaker, keeping in theme with his usual anti-LGBTQ rans we get at least once a week.

“NAS X WTF U JUST DONT STOP,” wrote Boosie on Twitter upon waking up yesterday morning at 6am. “I THINK HES GOING TO TURN AROUND N SUCK ONE OF HIS BACK GROUND DANCERS DICK ON NATIONAL TV #protectyours #godturninoverinhisgrave.”

The last time Boosie took aim at the openly gay rapper, Nas X responded with some trollery, as he does. He’s officially responded to Boosie’s tweet, getting him again. “I apologize mr. boosie,” wrote LNX. “i left a really detailed apology in the link below.”

The link attached did not contain an apology. Instead, the artist linked Boosie to the pre-save of his debut album MONTERO, which comes out in a few weeks. Nas then returned today seemingly responding to Boosie and any other homophobes who’s favorite excuse is “what about the kids?” tweeting: “stop using y’all lil booger nosed kids as shields, hate gay ppl with your chest”

What do you think of all of this? Did you see anything wrong with the pregnancy photos? If I’m tired of talking about Lil Nas X I really don’t see how Boosie isn’t.

@LilNasX is to Boosie, what Arnold was to Helga. Prove me wrong. #MONTERO #LilNasX #Boosie pic.twitter.com/rY2DPUpTLJ