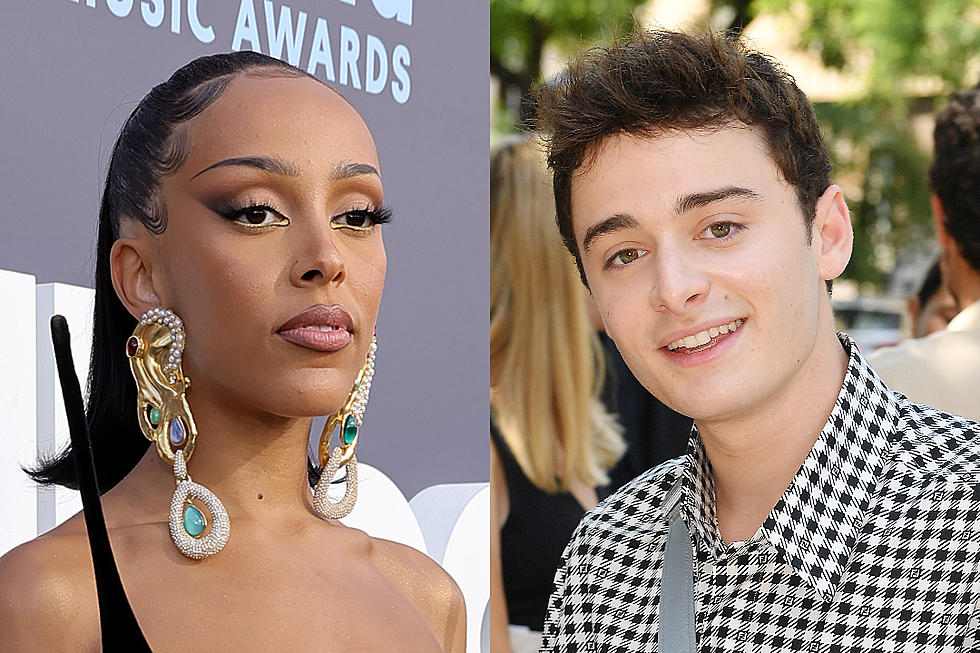 I don’t really think there are any circumstances where I’d personally take the time to beef online with a minor, but Doja is feeling some type of way about her thirst DM’s being put on blast.

Doja Cat has found herself facing little random backlash. The 26-year-old superstar was put on blast by Stranger Things actor Noah Schnapp, 17, after sliding in his DM with a request to set her up with his co-star, Joseph Quinn. Schnapp shared the DM via TikTok, leading to a flurry of negative reaction. In the DM, Doja asked Noah to tell Quinn to “hmu” before the 17-year-old actor sent over his co-star’s Instagram account.

In response, Doja went on Instagram Live where she went off on Schnapp for “exposing” her messages. She acknowledged that he is only a teenager, claiming that she’s trying to be “super fair” in the way that she addressed the matter.

“When you’re that young, you make mistakes. You do dumb shit,” she wrote. “You f*ck up relationships with people, you make mistakes — like you’re supposed to so that you know not to do it in the future. I did my share of fucked up so that I don’t f–k up again.”

Following the bit of grace she offered the actor, she called his actions “so unbelievably socially unaware and wack. “Like, that’s like borderline snake s–t,” she continued. “That’s like, weasel s–t. And like, I’m not saying that encapsulates his entire personality. Noah is not like the definition—like I wouldn’t imagine he is. Maybe he is?”

Many social media users chimed in following Doja’s live, with some claiming she was overreacting to the incident, and some even citing the fact that she had previously posted to Twitter herself revealing her supposed interest in Joseph Quinn, tweeting “Joseph Quinn fine as sh*t,” back in May. Others gave Doja the side eye simply for “beefing” with a 17-year old online.

Honestly, this whole thing is dumb and very high school.. which is appropriate for Schnapp considering he’s probably still attending. Now, to be fair.. I don’t post any private convos with famous friends without running it by them prior on the rare occasion that I do decide to share something… but perhaps that’s why you shouldn’t engage in these conversations with kids. Ultimately, this is a situation that could’ve definitely went without public acknowledgement on both ends. Are y’all bored? Take a look at the receipts and a few reactions below:

i don’t know what’s more funny the filters while she’s being serious or the fact that doja cat is beefing with noah schnapp😭 https://t.co/VQuxDBb7tR

the way Doja Cat reacted to Noah Schnapp saying she’s got a crush on Joseph Quinn is more embarrassing than anything hahahaha like it’s only embarrassing if you let something be embarrassing why couldn’t she just own it, it’s a harmless fun and she’s just made a tit of herself

doja cat has instagram you search up joseph and joseph quinn comes up immediately. fawk was she doing in noah schnapp’s dms maybe he thought it was a joke cause she literally dmed him on insta WHICH joseph has…like 😭 saying a 17 yr old is on some snake shit cmon

genuinely confused why doja cat is responding with this energy. she had already made her interest in joesph quinn public, its not like noah relieved anything she hadnt essentially already publicized herself. why are we throwing around the words "power play" & snake shit"?? https://t.co/32JWYUn9bI pic.twitter.com/HqWot6TOUl

Is Doja Cat really mad that Noah Schnapp revealed that she is interested in Joseph Quinn (which she has publicly stated btw) or is she just mad that we’ve found out her grown ass is DMing a 17 year old? pic.twitter.com/1VRNPC0Rch

Doja Cat really could have messaged Noah to take the video down but instead her 26 yo ass went on a rampage on TIKTOK LIVE calling Noah a snake AND a dumb kid umm😨 pic.twitter.com/Q6zCMEvGdG