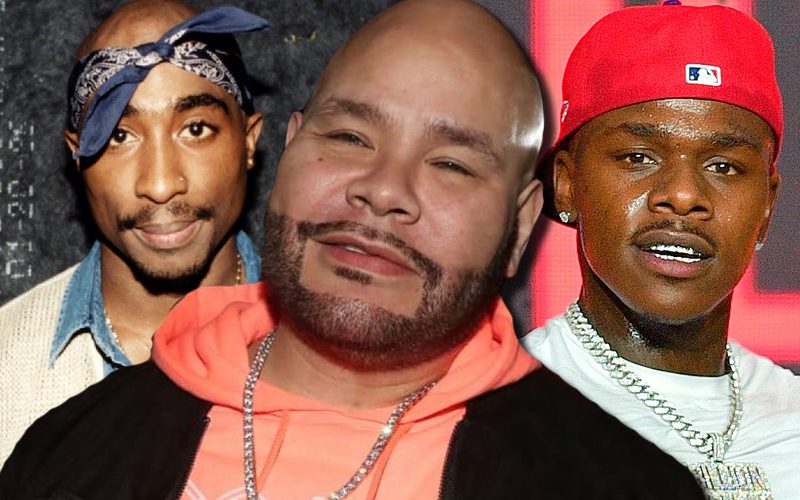 You know what? I think we’re at a point where we should just stop comparing new acts to these legendary artists because it’s getting more and more disrespectful by the second. Joy Crack may have been smoking just that when he compared DaBaby to the legendary Tupac Shakur.

Rap City returned to BET earlier this month with the Rap City ’21special, and one of its most talked-about moments so far has been Fat Joe’s guest appearance on the show. During their interview, Big Tigger asked Fat Joe to play a game and name the 2021 version of some of Hip-Hop’s past legends, including Jay-Z, Lauryn Hill, E-40, and more. However, Fat Joe’s wildest response came when he was tasked with picking the “2Pac” of this generation. To many fans’ surprise, Fat Joe chose… DaBaby.

Big Tigger’s question was bound to spark a reaction from fans, but many fans likely never even thought that the controversial North Carolina rapper would be Fat Joe’s choice as the modern-day version of 2Pac. As a result, the Family Ties artist’s Rap City appearance has gone viral, with many people slamming him for giving such an off-the-wall hot take in regard to one of Hip-Hop’s most influential legends.

On Tuesday evening, Fat Joe must have caught wind of the internet backlash because he hit Twitter to defend his DaBaby and 2Pac comparison. “No ones 2pac there’s only one,” he explained, “but i was asked the question and da baby a super real one he lives what he raps about. This didn’t really stop any of the talk however which caused Joe to again address the topic during his weekly livestream. Starting out by saying that he wasn’t taking anything back,Fat Joe broke down his thought process.

Continuing on to explain that there will never be an exact comparison to 2Pac, Joe contextualized his Rap City statement and talked about the reality of the situation.

“I knew Tupac Shakur in real life. Not as a mythical person. I knew the man in real life,” Joe said. “He was the realest rapper ever. So now when I think Pac, not just musically or whatever the case may be … I’m thinking DaBaby a real one. Certified real one, whether you like him or you don’t like him or whatever, I believe he lives what he raps. And that’s very much like Tupac.”

DaBaby, who drew the ire of the internet and multiple communities of people after going on a homophobic rant at Miami’s Rolling Loud festival back in July, has been thrown back into the limelight as Dave Chappelle used his “cancelling” as a cornerstone of his argument against cancel culture in his most recent special The Closer. Take a look at what Joe had to say as well as the explanation that followed. Do you think Joey Crack may have been indulging in the crack here or do you get what he was trying to say?

Everyone when Fat Joe said that DaBaby was the Tupac of this era
pic.twitter.com/rH5rj4wBuM

dababy not even the best baby of this era pic.twitter.com/pZ6cyddBQV

How everyone reacted to fat joe saying dababy is the Tupac version of 2021 rap: pic.twitter.com/h8CVHqzYoE

Fat Joe explains DaBaby vs. 2Pac comparison he made on Rap City