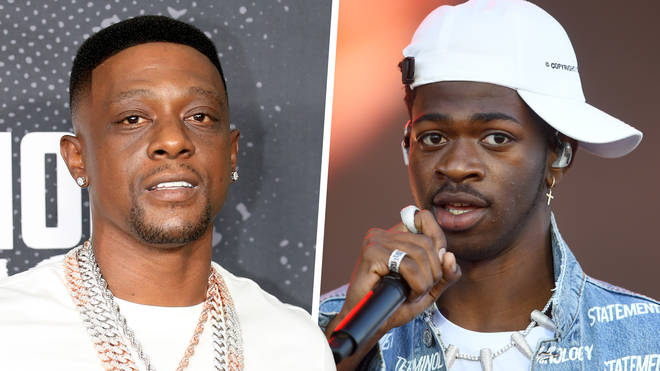 After the last few years we’ve had with many of us coming together to fight police brutality and racism, it’s heartbreaking to watch many of our own turn around and use the same flawed logic racists use to attempt to justify their hate.

It isn’t a coincidence a bunch of rappers and entertainers are showing their true colors, spreading homophobic messages this week while Lil Nas X, a gay artist, has the top trending song in the country. While some of the loudest haters, including DaBaby and T.I., are chalking up their homophobia to “freedom of speech,” they seemingly don’t understand the real weight of their words, prompting Lil Nas X to jump into the conversation.

While he was never mentioned during DaBaby’s disgusting rant at Rolling Loud, T.I. and Boosie Badazz have mentioned the rapper during the aftermath of the controversy, with Boosie calling him a homophobic slur and threatening to beat up the artist if he ever performed naked, as he has been teasing. On Thursday morning, LNX trolled Boosie and T.I. by “responding” to their hateful messages, luring them in and driving them to the “INDUSTRY BABY” music video, but he’s officially come through with another tweet, directly replying to Boosie and Nick Young, who co-signed the rapper’s remarks.

“Facts, freedom of speech,” wrote Nick Young on a video of Boosie calling Lil Nas a homophobic slur. “A n***a saying he will ‘beat my f***t ass’ is not what we what we meant by freedom of speech,” responded LNX. He also retweeted a fan’s post, which reads, “Bro it’s so fascinating to watch people retreat to very similar language as racists when it comes to being homophobic.”

Check out his response below and let us know what you think? By these people’s logic, racists, biggots, colorists etc can run around spewing their hateful thoughts and as long as they justify it as “freedom of speech” or an opinion it’s all good. Trash.

a nigga saying he will “beat my fggot ass” is not what we what we meant by freedom of speech https://t.co/WT0Xc82VlR

Bro it’s so fascinating to watch people retreat to very similar language as racists when it comes to being homophobic. https://t.co/tyc3MstpCz

“Free speech” “Just his opinion” “we’re the real victims” “we’re held to too high a standard” “everyone is too sensitive these days” the same language the yts use.

freedom of speech does not cover hate speech and never has pic.twitter.com/QldYlPepa5

People being so openly homophobic in those comments is disgusting. Anybody called CPS on Boosie for paying a grown woman to m*lest his child?