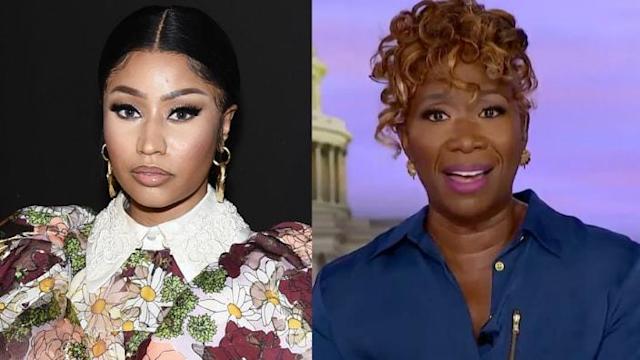 It’s very telling the amount of unnecessary drama Minaj has decided to address on Twitter as of late. From who asked who to be on what song, to defending her fan like they weren’t the ones harassing others, to now vaccines. It seems Minaj is willing to address any headline but the one that is single handedly tainting her career and legacy. We’ll talk more about that later, though.

While most were tuned into the Met Gala, Nicki Minaj’s COVID-19 vaccine remarks became a trending topic and to call the response she’s received “backlash” would be an understatement. It all started when the “Chun-Li” decided to share that she is skipping was skipping out on the Met Gala in New York City due to it’s vaccination requirements and informed her fans that she had yet to be vaccinated because she was still doing her research. Minaj also claimed that she she allegedly contracted COVID recently and had to pull out of this past weekend’s MTV Video Music Awards performance, yet she still hasn’t done enough research to make her comfortable with receiving the vaccine and proceeded to tell a rather strange story about a “cousin’s friend” who lost his testicles due to the vaccine.

This story has run wild on social media, and while it has become the subject of thousands of memes and jokes, others have called Minaj “irresponsible” for spreading alleged misinformation to her dedicated following. Political commentator and MSNBC correspondent Joy-Ann Reid called out Minaj and Meghan McCain addressed the rapper’s comments by tweeting, “That’s enough internet today.”

In response, Minaj replied to McCain and said, “Eat sh*t you,” but with Reid, she dug a little deeper in her bag of insults. “A lying homophobic c*on,” wrote Minaj as she shared a screenshot of a story about Reid penning homophobic comments. “I guess I can join in the reindeer games too right? Ppl can go on tv & lie on me, I can report on them, too right?. Doesn’t have to be truths. It can be half truths. Uncle Tomiana asked who on earth would trust the US FDA guys.”

Minaj also made quite a few claims that the “media” was lying on her although each article she reposted quoted her exact tweets so it’s a little difficult to understand anyone allegedly took her words out of context like she claimed. Ultimately, anyone getting vaccinated or not is their discretion, I just think that Minaj should’ve just sat the Gala out and ignored any reasons behind her decision to avoid the controversy similar to what she’s doing with her personal life. As mindless as her fanbase moves when it comes to her, they’re going to take whatever she says about the vaccine or anything as bible and actually apply it to their life.

Peep it all below and let us know your take on this mess.

Love u babe. I was prepping for vmas then i shot a video & guess who got COVID? Do u know what it is not to be able to kiss or hold your tiny baby for over a week? A baby who is only used to his mama? “get vaccinated” Drake had just told me he got covid w|THE VACCINE tho so chile https://t.co/wInXoJcHBn

They want you to get vaccinated for the Met. if I get vaccinated it won’t for the Met. It’ll be once I feel I’ve done enough research. I’m working on that now. In the meantime my loves, be safe. Wear the mask with 2 strings that grips your head & face. Not that loose one 🙏♥️

My cousin in Trinidad won’t get the vaccine cuz his friend got it & became impotent. His testicles became swollen. His friend was weeks away from getting married, now the girl called off the wedding. So just pray on it & make sure you’re comfortable with ur decision, not bullied

I know babe. A lot of countries won’t let ppl work w/o the vaccine. I’d def recommend they get the vaccine. They have to feed their families. I’m sure I’ll b vaccinated as well cuz I have to go on tour, etc. https://t.co/7SK5Df0yBf

This is what happens when you’re so thirsty to down another black woman (by the request of the white man), that you didn’t bother to read all my tweets. “My God SISTER do better” imagine getting ur dumb ass on tv a min after a tweet to spread a false narrative about a black woman https://t.co/4UviONyTHy

Why would they bother to read when the lie is so juicy & provocative & got her dumb ass on tv. They got someone with black skin for a reason. They always use us against us. https://t.co/Cdr6YaYYQo

3 lies in a row from huge news platforms. I cited my young child as why I didn’t want to travel. But notice how NONE of them mentioned that? Ask yourself why that was. pic.twitter.com/vQjorbKCCO

I guess I can join in the reindeer games too right? Ppl can go on tv & lie on me, I can report on them, too right? ☺️. Doesn’t have to be truths. It can be half truths.

Uncle Tomiana asked who on earth would trust the US FDA guys…@JoyAnnReid pic.twitter.com/tt93FM85uc

This is literally what you said verbatim. pic.twitter.com/KA74Sp3VjB