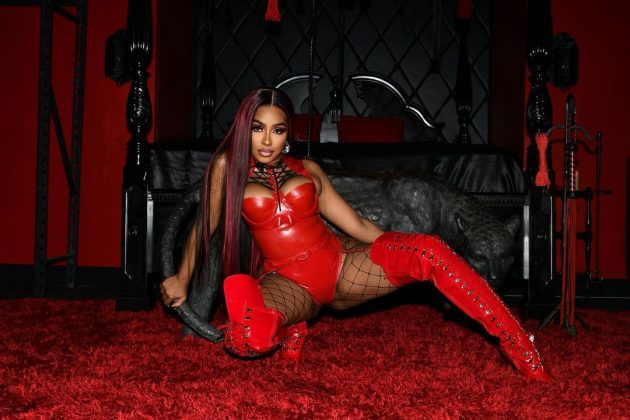 Caresha pulled up to the dungeon to give her own list of rappers she’d like to take to back to Miami and boasts about what she wants to do with them—and their girlfriends—in the bedroom (except Kodak Black, not you).

The City Girls and their fans have insisted that they aren’t breaking up, but that does not mean the pair of best friends haven’t worked on music outside of their duo. Both JT and Yung Miami have often partnered with peers without one another, but on Friday (October 29), Yung Miami returned with a solo record..a very short one, but a record indeed.

“Rap Freaks” only lasts for about 1 minute 45 seconds, but Yung Miami made sure to get the rumor mill running with the content. Taking an obvious page from Biggie and Lil Kim’s records “Dreams,” a formula we also saw borrowed by Nicki Minaj for “Barbie Dreams,” Miami names names, calling out all her industry crushes. She includes Megan Thee Stallion, Lil Durk (and his partner India Royale), Future, Meek Mill, Moneybagg Yo, 50 Cent, Rod Wave, and her rumored beau Diddy. The song is accompanied by a BDSM-themed, borderline-NSFW music video featuring Miami doing the splits on a ceiling swing clad in black leather with a matching mask.

In an interview with Billboard shortly after the tracks release, Miami confirmed her inspiration for the track, “The song is showing love to all the rappers right now, it’s nothing personal,” she tells said. “I [named] a bunch of the guys who are on top, that’s hot, that’s poppin’. Nothing is personal, nothing is literal, I’m just having fun.”

“I just felt like it was going to be a moment in hip-hop, so it was something that I went into the studio wanting to do,” she says.

I almost feel like I can’t even look to give this one a bop or flop myself because looking at how short the track was, with no hook, no nothing..coupled with the fact that it was a clear promotional tool to market Miami to launch her sex toy collab with Kandi Burruss today, I just.. I don’t know. I don’t think the plan was to even make a hit as much as it was to create a conversation. Take a look at the video for ‘Rap Freaks’ below and let us know what you think. ISSA BOP OR ISSA FLOP? Buenos Noches.