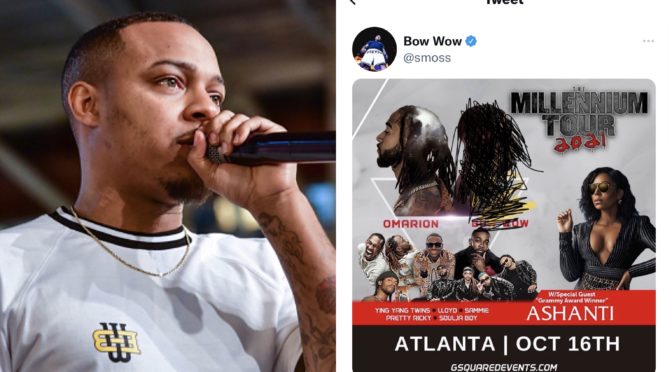 Bow Wow claims to have had enough of the “b*tching and complaining” on the tour, but took to Twitter to do exactly that… b*tch and complain.

If you’re attending the Millennium Tour in Atlanta tonight in hopes of seeing Bow Wow perform live, you may be disappointed. Earlier today, the rapper went on a Twitter rant, airing his grievances about the shows so far since the tour kicked off on October 1st.

“Too much b*tching and complaining on this tour,” Bow Wow wrote. “I’m bussn cats asses EVERY NIGHT! Every night they try and complain and take something away from me!”

Too much bitching and complaining on this tour! Im bussn cats asses EVERY NIGHT! Every night they try and complain and take something away from me! I give 1000% and yall know it! ATL I HOPE YALL SHOW TOGETHER! IMA BUSS YALL ASS FOR 45 mins straight! TRY ME!

The 34-year-old then went on to tell Atlanta audiences that he plans to “BUSS YALL ASS FOR 45 mins straight.” Followed by a tweet reading, “this might be my last show! I’ve had enough.”

“Here’s the truth,” Bow Wow shared. “I do 15 min EVERY NIGHT! I can’t even do my full songs. AND I STILL BE BUSTING FOLKS ASS!”

Heres the truth! I do 15 min EVERY NIGHT! I cant even do my full songs. AND I STILL BE BUSTING FOLKS ASS! think the fans dont complain about my set being 15 mins? Only way i show up tonight if i do my full set! Straight up!

The Like Mike actor then said that the only way he would perform at this evening’s show is if he’s allotted the time to perform his full set.

The Millennium Tour also has Omarion as a headliner, with Ashanti, Soulja Boy, and many others supporting alongside them. Apparently, Bow Wow has been in touch with “O” since his meltdown this morning, and the two have made plans to ensure tonight’s show goes better for the “Bound With Me” rapper.

“Just got off phone w O. Tonight gone be one for the ages … I promise you that! I’m going CRAZY I swear to god,” he tweeted two hours ago.

In another post, Bow Wow predicted that tonight’s Atlanta concert will be the best performance that he’s ever done.

Only time will tell if the rapper delivers. What do you think could be going on behind the scenes? To be fair, I will say the idea of Bow only having a 15 minute set honestly does seem insane considering he’s listed as a co-headliner and also taking his catalogue into consideration. Can anyone who’s been to the tour verify?