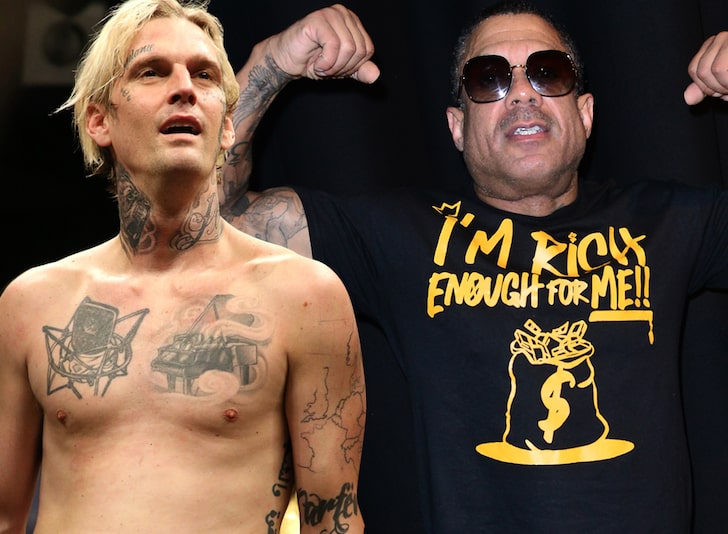 I’ll tell you what, seeing Benzino’s name in headlines so much was definitely not on my 2022 bingo card, especially not with Aaron Carter but… here we are.

Benzino has had an interesting last couple of weeks. I would say the internet has been steadily coming at his neck, but he doesn’t have one so I guess the better phrase would be that he has a lot of weight on his shoulders. The rapper became a topic of conversation in the past few weeks in the wake of his recent beef with 50 Cent, his alleged relationship with Shauna Brooks, and the release of his daughter Coi Leray’s debut album.

50 Cent made it his business to continue to troll Zino for his alleged relationship with Shauna, who is a transgender woman, which led Zino to request wto settle their beef in the ring. I’m not sure why he ever thought it would happen but he signed a contract with Celebrity Boxing and announced the news with a challenge against 50 Cent. “Let’s throw those right there,” Benzino said as he showed off his hands to the camera. “Listen, man. You want to beat man about things, man? Step in the ring, because that’s [where] men settle their differences. Fuck all that internet shit. Step in the ring.” The “Zster” proceeded to taunt 50 Cent on camera as he signed the contract.

Well, as expected 50 paid Zino’s challenge dust and apparently the former “Love & Hip Hop” castmember will be stepping in the ring against someone who’s about 200 lbs lighter… Aaron Carter. According to TMZ, Celebrity Boxing’s Damon Feldman reported that Carter is slated to fight Benzino and contracts have already been signed with Feldman confirming the main event boxing match is set for June 11 in Pembroke Pines, Florida.

Honestly, this all just screams embarrassment on both sides, especially for Carter Aaron who is foolishly coming back for seconds, as many may recall, he got pummeled by Lamar Odom last year, where he was greatly outsized. Benzino’s also bigger than him, but it sounds like Aaron doesn’t care … and wants his shot to redeem himself.

I imagine this fight to look like two drunk uncles fighting on Thanksgiving, but I’m sure someone will tune in. Will you?