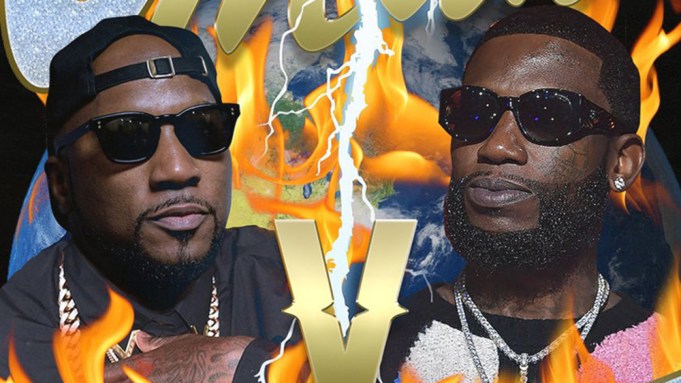 Swizz Beatz may be on his way back home because the way this is going could cost him and Timbo that Apple deal. Gucci Mane slowly goes back to his old ways ahead of Thursday’s “Verzuz” against Jeezy.

In a rather unexpected turn of events, Gucci Mane accepted to face Jeezyin person for the season 2 premiere of Verzuz. This comes after Gucci Mane not only “respectfully declined” but also requested $1M to participate in any of these Verzuz battles. Well, it’s going down and truthfully, it’s bound to get ugly because things are already getting ugly and just may be the first battle where a security team better be present.

At the core of their feud is the murder of Pookie Loc, an artist signed to Jeezy’s label CTE who was shot and killed by Gucci Mane in an act of self-defense. Following Jeezy publicly placing a $10K reward for Gucci’s chain, Loc reportedly attempted a home invasion and robbery on Gucci Mane’s home.

As the story goes, Gucci Mane buried Pookie Loc’s body behind a middle school in Decatur which is ultimately what prompted a warrant to be issued for his arrest. And while Gucci did beat the case, he continues to taunt Jeezy over the death of his friend. Earlier this year, Gucci shared a meme of a reenactment of the shoot-out that led to Pookie Loc’s death.

Jeezy and Gucci have continued to throw slight jabs at each other over the past few days to build the hype for the performance. The latest shot from Gucci’s end is less playful and far more telling of the direction this could lead to. Just days before they’re supposed to face off and Gucci Mane has brought it up once again with reference to his (non)-diss track, “Truth.”

“Go dig ya patna up n***a I bet he can’t say shit,” the meme reads with a prediction of Jeezy’s reaction. It looks like the old Gucci Mane is creeping back up right before our eyes.

At what point do you think Gucci Mane will play “Truth” during his set?