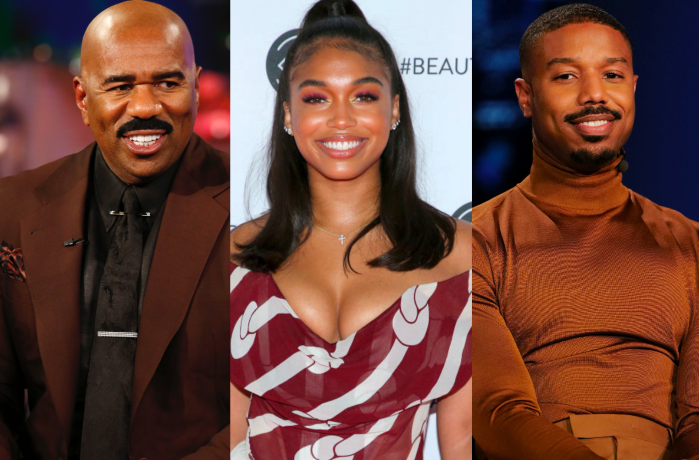 Whew Chile, Lori’s even got her parents showing out for her publicity stunt.

Marjorie Harvey is hard at work looking to turn her daughter into the black Kim K with one publicity relationship after another. Michael B. Jordan and Lori have made their pr-ship, I mean, relationship public recently and since…they can’t stop shoving it down the internet’s throat. The couple has shared videos and images of themselves enjoying vacations and holidays together, and some have actually think that this couldd be for the long term. Recently, Steve Harvey was asked about his stepdaughter’s relationship with PEOPLE’s “Sexiest Man Alive,” and he seems to approve but with hesitation.

“I like this one. I still got my eye on him,” he said quietly. His co-hosts asked why he was speaking in a low voice. “I mean I like him, but like I say to all of ’em, ‘I might like you, I might approve of you, but I got a thumb-size section of my heart filled with nothing but pure hatred for your ass. Just in case I need it,'” Harvey quipped. “Like right now? Nice guy. But I got this little section partner, where all I gotta do is click a switch and I can hate your ass. ‘Cause, you ain’t the sexiest man in the world to me! Let’s be clear about that.”

His co-hosts wanted to know how involved Harvey is with Lori’s suitors when he meets them. “I always stay back,” he said, adding that he’s critical of the men in his stepdaughter’s life. “‘Hey man, how you doing?’ I can’t stand your ass,” Harvey joked. “I’m that dude.” After the laughs dissipated, Steve Harvey gave advice to parents who may not approve of their child’s choices.

“Let me say this about parenting: it does not come with a manual. And to all the parents out there whose children have done something totally against everything you’ve ever tried to teach them, share with them, or get them to understand, once they become adults they can go and do whatever it is they want to,” said Harvey.

“It ain’t got nothing to do with your well-wishes, your thoughts, your hopes for them, or nothing else. Do not beat yourself up as a parent when your child does something counter to what you believe is right for them, because they have to live their life and learn. And they will learn. They will eventually learn.

Listen to Harvey speak about Michael B. Jordan and Lori Harvey’s relationship below. Clearly, he hasn’t met all of Lori’s men, he’d never have time to get anything done. Are you all feeling this Lori/Michael union?