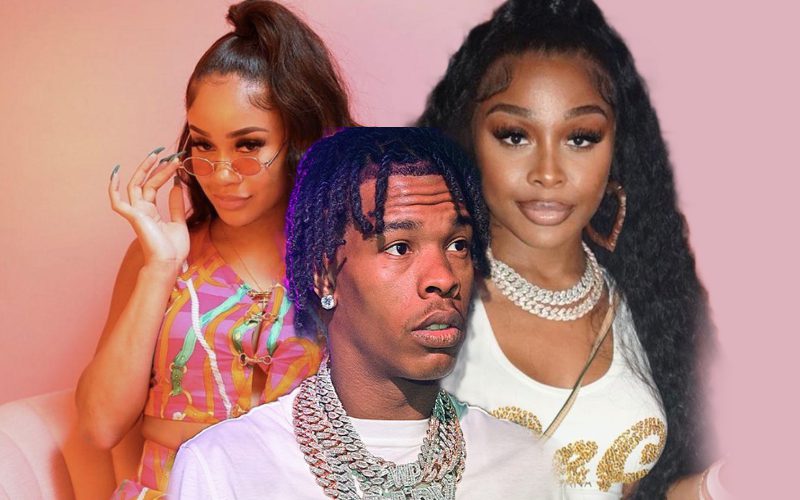 Maybe little Ms “twerk it for a icy chain” needs to take a break from these rappers because it doesn’t seem like they work out well for her. Is Saweetie out here showing Baby might have her a little in her feelings?

Lil Baby and Jayda Cheaves are like the poster children for those on-again off-again toxic baby mama/daddy relationships we see. It’s hard to say, but from the look of the Jayda’s social media, things are once again heating up between her and her baby daddy – for the time being, that is.

Over the past few days, Cheaves has been posted up on a luxurious vacation in Mexico, twerking her days away on the beach with her besties. Over the weekend, videos uploaded across various blogs appeared to show that the Harder Than Ever hitmaker had joined his ex.

On Sunday, Cheaves’ TikTok page lit up with some new content, including a video of the couple dancing to “Bitcoin” by YungManny, which samples Peggy Lee’s “Big Spender.” In the caption, she wrote, “lol he such a good learner.”

The song choice is likely no coincidence, as Baby has never been secretive about how much he spoils the 24-year-old. For Christmas, he gifted her with a flashy new vehicle and some designer bags, and within weeks internet sleuths figured out that they had joined dozens of other celebrities who headed to St. Barts as they rang in the new year.

Lol he such a good learner

Before this, it looked like Cheaves and Baby could’ve been calling it quits for good, as he began spending some time with a pre-bald head Saweetie, even taking her on a Chanel shopping spree that she didn’t hesitate to flex on her Instagram page.

Soon after Baby and Jayda’s vacay videos, Saweetie may have thrown some shade at the couple with a recent upload to her own story. One upload sees a photo of someone flashing their middle finger, and another is a repost from DJ Miss Milan, who urged the 28-year-old to “send him back to the streets! Send him back! Return to senderrrr @saweetie.”

Some haters have been clowning the Icy Girl for her apparent response, saying things like “next time get your shopping spree and don’t post him lol. Get played in private,” and “I kinda think he went back where he should have stayed and left her in the streets.”

Check out Saweetie’s post below, along with some of social media’s responses and let us know what you think about Lil Baby and Jayda Cheaves’ rumoured reconciliation.

Saweetie letting her mood on this Sunday be known! 🗣 (📸: @gettyimages) pic.twitter.com/suTdIWejRQ

Saweetie when she seen Lil Baby back with Jayda: pic.twitter.com/EG7GSKPAmI

Why would saweetie be jealous of jayda? Lil baby dropped 100k on her lol i mean who’s to say he ain’t still talking to her? Like it’s lil baby we talking about he’s a serial cheater 🤣😩