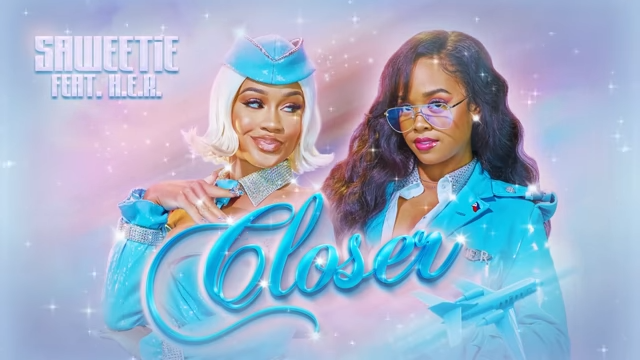 Saweetie tapped H.E.R. for the assist and the result is giving elevator music or shopping at Forever 21 vibes but you know what, that sounds very on brand for Ms. Icy.

It’s seems like it’s been a while since Saweetiehas spoken about working on this next season of her career after claims that she’s even buckled down in boot camp to work on her craft. There seems to have been several delays as it pertains to her official debut album ‘Pretty B*tch Music,’ and while it is still unclear when that project is slated for arrival, Saweetie continues to roll out new music.

Just before the weekend, the “Icy Chain” rapper shared her latest single “Closer,” a track that features a hook from R&B-Soul songbird H.E.R. “I wanna fall in love for the weekend,” Saweetie opens the first verse, going on to fantasize about ordering room service with one of her three weekend boyfriends. Over a bouncy ’80s-inspired beat, her attempts at bars pair with H.E.R.’s wispy chorus that actually is the most catchy part of the song. “Pull me closer,” she sings. “It’s the freak in me, I wanna show you.”

The video sees Saweetie taking control of “Icy Airlines” with H.E.R. as her co-pilot (both sporting O.G. flight attendant costumes), Throughout the video, Saweetie goes on romantic rendevous both in a luxurious hotel room and on the tennis court before hitting the skies again. Nothing spectacular, but she looks cute! Which seems to be the best description of Saweetie’s career up until this point.

Y’all take a look at “Closer” below and let us know what you think for yourself. ISSA BOP OR ISSA FLOP?